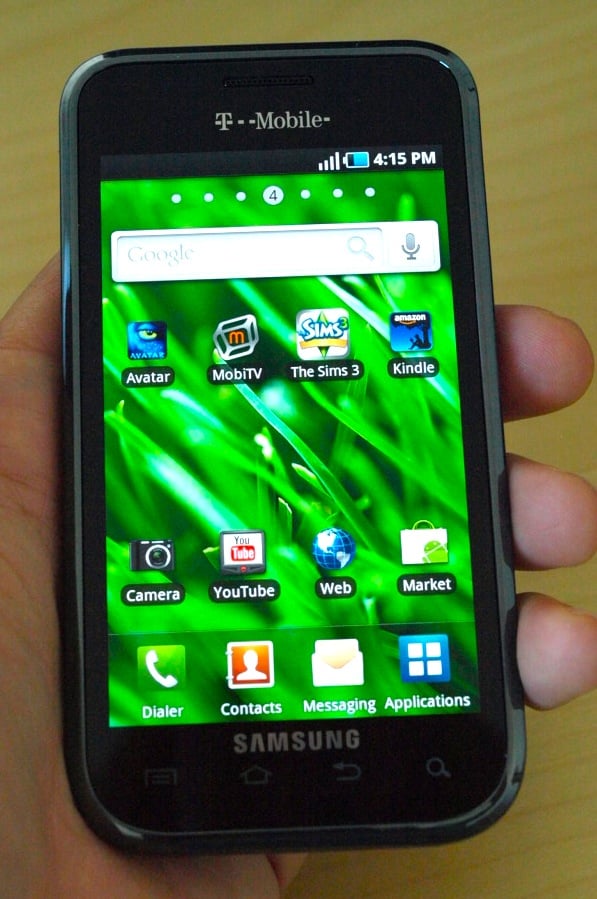 The Summer of 2010 will be remembered in years yet to come as the season that saw Android superphones like the T-Mobile Samsung Vibrant – which is the T-Mobile variant of the Samsung Galaxy S, in case you didn’t already know – coming into their own as high-powered competitors to the iPhone. In fact, the T-Mobile Vibrant could have what it takes to convince potential iPhone customers to stick with T-Mobile, rather than defect to AT&T for a chance at iPhone 4 glory. To show you what we mean, we got our hands on a new Samsung Vibrant to do some hands-on tours of the hardware and software bundled with Big Magenta’s Galaxy S variant.

First off, the Vibrant is a more pure variant than AT&T’s Samsung Captivate. While AT&T opted for a major face lift of the Galaxy S to fit their needs, T-Mobile went with a subtle redesign that looks more like the stock Galaxy S than does the Captivate. The front face is basically a smooth glass slab, which protects a 4-inch Super AMOLED display and four touch-sensitive (capacitive) navigation buttons along its bottom edge. The entire phone has just three physical buttons – one power button and a volume control rocker that we’re counting as two separate buttons – that makes the Vibrant look slick. Unfortunately, the more pronounced bezel around the front face of the device keeps the Vibrant from looking as sleek as the Captivate.

On the hardware side, the Vibrant is one competent Android phone. It’s packed with a 4-inch Super AMOLED display, 5-megapixel camera, 16GB of onboard storage, WiFi (b/g/n), 3G data, GPS, Bluetooth 3.0, microSD card slot and a 3.5mm headphone jack. There’s also a little sliding-door that protects the microUSB port – a departure from the open ports and rubber-plug designs we’re used to seeing these days.

Better yet, when you lift up the battery cover, you’ll be greeted with a microSD card slot that’s hot-swappable – that means you won’t have to pull the battery and reboot your phone every time you want to change your microSD card. Did we mention the massive Super AMOLED display that not only displays brighter colors, higher contrast, sips less battery power, and is more viewable in sunlight than traditional AMOLED displays?

The Vibrant runs on Android 2.1 OS, which isn’t the cutting-edge of Android OS, but is as good as it gets right now. It’s skinned with Samsung’s S Life UI, so you get all kinds of cartoon-ish UI elements and some apps that make your life a whole lot easier. The app tray scrolls sideways and presents apps on a colored background badge, which gives the Android app tray an entirely new look. Pulling down the notifications bar reveals toggle shortcuts for activating Bluetooth, WiFi, GPS and Silent Mode – a convenient little feature that we almost passed over, but one that really makes the phone easy to use.

The Daily Briefing app and accompanying widget make it easy to get at-a-glance updates on your news, stocks, weather, and calendar events. The app also integrates into the Smart Alarm feature, which activates the Daily Briefing app as is subtly and gently wakes you from slumber with nature soundtracks. And, because the T-Mobile Vibrant’s Super AMOLED display is a hands down eye-gasm of vivid colors, T-Mobile has preloaded the handset with the Avatar movie. You also get The Sims 3 game and a free trial to MobiTV with the Magenta version of the Galaxy S.