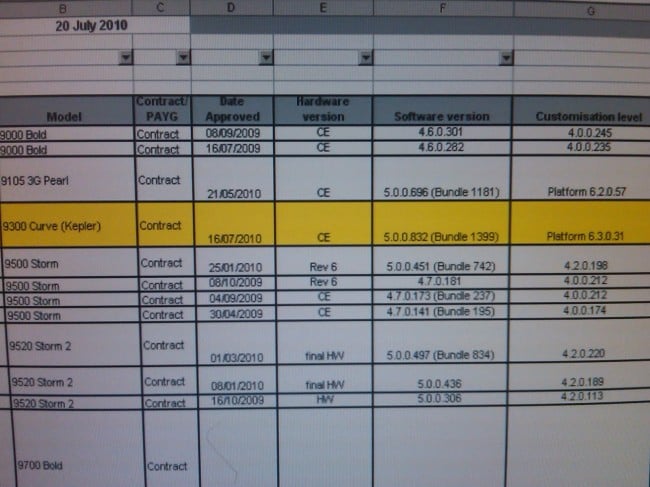 The rather unexciting BlackBerry Curve 3G 9300 rumoured to be going to T-Mobile, Verizon, Bell, and Rogers will be finding its way to Vodafone UK around Q3, if this source of this internal document is to be believed. BlackBerry OS 5.0.0.832 has been approved, so it seems unlikely that the Kepler will be launching with anything as exciting as OS 6, which is too bad, since the 9300 seems like a real snoozer so far.

The Bold 9650 was in a similar spot as the 9300 – its job was to fill a gap in an older-generation BlackBerry. The Tour 9630 was sorely missing Wi-Fi, so the 9650 plugged that hole, but it also added the trackpad and more app memory, making it a worthwhile upgrade. However, the 9300 does absolutely nothing else other than add 3G to the 8520, and even less to the 8530, which already had 3G by way of EV-DO on CDMA networks. Maybe we’ll be surprised at launch. Hell, there’s got to be some reason all of these carriers are lining up for a phone most of them already have.

After a lot of talk about a new BlackBerry Storm, we're starting to see something at least half-way concrete. If...