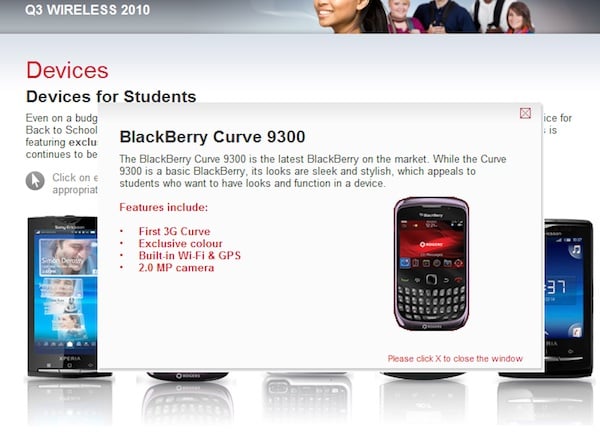 The BlackBerry Curve 3G 9300 (Kepler) is coming to Rogers. I bet you were wondering when news of this was going to hit, right? Before we talk about it, let’s recap recent goings on.

Just yesterday, we told you about the 9300 and how it is making the journey to Bell. A leaked leaflet shows off the new device, and in this case, it’s branded as the ‘Curve 3G’. While no launch date or pricing has been found for the Bell 9300 as of yet, we’ll be sure to keep our collective ears to the ground for more… and the same goes for T-Mobile and Verizon. Both are rumored to be picking up the device as well.

Getting back to the Rogers scene, yesterday my good bud Kevin over at CrackBerry posted some interesting info. It’s looking like Bell will not have any exclusivity with the 9300, as Rogers is aiming to knock the new Curve out the door during Q3.

This came from a recent Q3 2010 training at Rogers… it appears BB 9300 is confirmed for Q3 in exclusive color.

‘Exclusive color’ you say? Well, more like COLORS. Rumor has it the Rogers ‘Kepler’ will be available in your choice of grey and violet. No word if the standard black will be available as well, but we should know soon.

The upcoming BlackBerry Kepler spotted on the way to T-Mobile as the 9300 and rumoured to be going to Verizon...