Research In Motion knows it has a lot riding on the upcoming BlackBerry 6 and the smartphone maker wants you to know this won’t be the same old stodgy BlackBerry. RIM recently showed off some of the multimedia capabilities of its next operating system and these actually look pretty cool.

On its blog, the BlackBerry makers showed off its revamped styling and you wouldn’t be crazy if you saw some Apple iPhone influences. Check out the media player below: 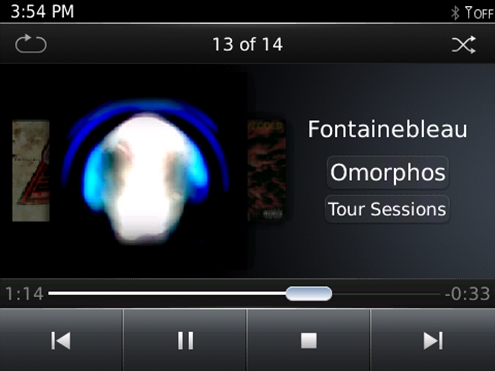 I’ve been quietly impressed with the strides RIM has made with its BlackBerry media player and the next version should continue to improve. If you use BlackBerry Media Sync to load your handset with tunes, it will automatically load album art for you and you’ll be able to swipe through tracks by flicking the album. Like Apple’s CoverFlow, this seems like a cool thing to demo but probably doesn’t make it easier to actually find the tracks you want.

I’m a big fan of podcasts, so I’m happy to see that RIM BlackBerry 6 will rock a preloaded podcast app. RIM said you’ll be able to search, subscribe and play audio and video podcasts on your device, so that’s a great thing in my book.

Some of the RIM BlackBerry 6 devices are expected to rock a 5-megapixel camera and you shutterbugs will be happy to know that the new OS will also include new camera controls. As you can see from the photo at the top of the post, this looks like it will also include face-detection, which is something lacking on the Apple iPhone.

New onscreen controls means there is no need to hunt through menus for your favorite options. You will be able to access and review camera pictures, set popular options and pick from a variety of scene modes, all directly from the camera screen.

You’ll also be able to organize these photo in more ways, including grouping pictures by dates or events. This OS will have strong touch integration, so you’ll be able to pinch-to-zoom on photos.

The RIM BlackBerry 6 will also include new video sharing options, multimedia discovery and BlackBerry Sync. Hop on over with the via link to check it all out.