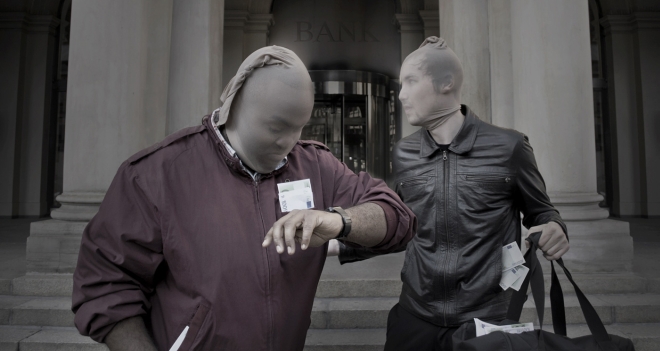 Horatio Toure. 31 years old. San Franciscan. Idiot. The story goes like this: Horatio was on his bike one Monday afternoon, riding in the South of Market neighborhood, when he sees a woman, Jordan Sturm, using an iPhone. Shouldn’t be too much of a surprise in that part of the world; it’s hipster central. So Horatio decides to do what any member of a consumer based society, constantly bombarding its citizens with false promises of happiness that come instantly once you purchase any number of products, would do. He snatches it.

Problem is the woman whose phone Horatio snatched is working for a company that was in the process of demoing a real time GPS tracking application. About 10 minutes later, half a mile away, the police found Horatio and he’ll soon be living in a prison cell with someone from a Mexican gang who will have oodles of joy committing sodomy on poor Horatio once he finds out he’s in the slammer for swiping consumer electronics.

“What are the odds that you would grab someone’s cell phone during a demonstration of the ability to track the phone’s location in real time? That’s what this unfortunate thief did.” said David Kahn, CEO of Covia Labs, based out of Mountain View, who was demoing an iPhone application called “Alert & Respond” to his public relations folks. This isn’t some silly fart application meant for casual use either, it was meant for police and military to keep track of their men on the field.

Apple provides a service similar to this if you sign up for their $99/year MobileMe service, but it isn’t meant for real time tracking. All we know is, if this bit of news teaches you anything, it’s to not steal other people’s stuff. Just put away some money everyday for a few months and then when the time is right, buy yourself a nice new toy.

Unless you want to be someone else’s toy in prison.