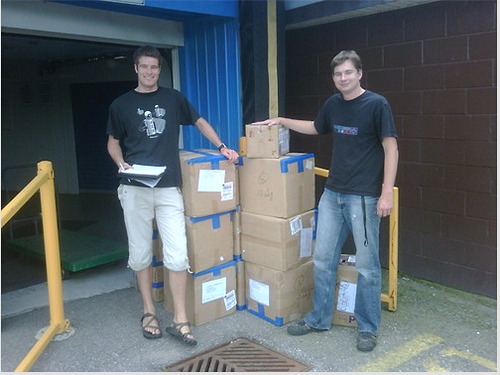 What time is it? It’s time to get an  inPulse watch for your BlackBerry. Well, almost. We’ve seen this little gem floating around since last October, and apparently the touchscreen wristwatch is getting closer to release. Boxes of components have arrived for inPulse and they’re ready for some assembly. Now, the watch isn’t going to replace your phone or anything, it is simply connected to your BlackBerry via Bluetooth so that you can see incoming messages and alerts, or incoming calls and the like.

Really, you’d be in it for the novelty or perhaps you’re just really lazy and sometimes taking your phone out of your pocket isn’t an option. You could be in the middle of a video game where a quick turn of the wrist is far simpler than letting go of the controls to check your phone, right?

This baby was supposed to be released in February 2010, but we’re well ahead of that now and still no inPulse watch for public enjoyment. If you still want one of these things to show off to all your friends, you can still pre-order one on the web and keep in tune with inPulse’s blog for updates on the product.

So the iPhone 4, EVO 4G and Droid X haven't really enticed you enough to commit to an overpriced smartphone...