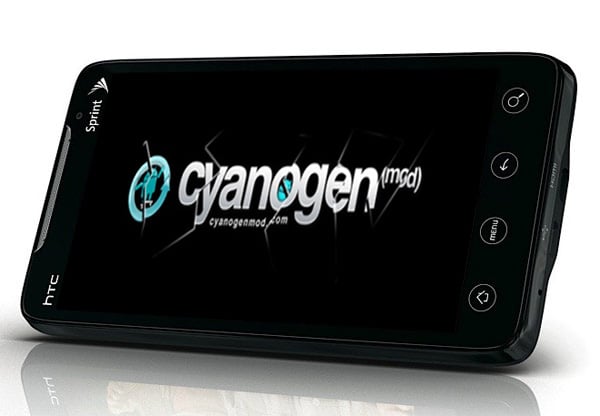 If the video of CyanogenMod 6 bringing Android 2.2 Froyo to the Sprint HTC EVO 4G wasn’t enough for you, we’re happy to tell you that the first 4G phone now has its first CM6 release candidate from the most popular custom ROM maker in the Android space. The news should have Froyo fans with an EVO 4G in their pockets to jump for joy, as we’re now even closer to a final CM6 release.

The RC1 on the EVO doesn’t necessarily mean that all bugs have been ironed out, as some issues still do remain at the moment. But, those issues will soon be resolved. This is definitely good news for those who wanted a taste of Froyo without having to wait until HTC comes out with an official update.

That said, we might not have to wait much longer for HTC Sense to get in on the Froyo action. Still some, like myself, may prefer the stock Android experience on their devices – and that’s why CyanogenMod is so appealing for many. With CM6, users can have the experience that Google intended you to, without a custom user interface slathered on top, regardless of how sexy Sense may be.

The EVO wasn’t the only Android smartphone to get a CyanogenMod 6 ROM, either. Devices like the Nexus One, T-Mobile G1 (Dream), MyTouch 3G (Magic), and the Motorola Droid have now been given an RC2 ROM for Android Mod addicts to enjoy. There’s been a lot of progress in the custom Android ROM space in such a a short time. Right now is the best time to be an Android geek.

I’m patiently awaiting CM6 for the T-Mobile Vibrant, as the TouchWiz UI Samsung has thrown on to their Galaxy S phones look way too much like the iPhone’s UI for my liking, although some UI elements are convenient and easy to use. So far, the Vibrant has gotten its own custom recovery image, which is the first step towards getting custom ROMs. Hopefully CM6 will follow shortly.

As mentioned before, the RC1 on the HTC EVO 4G still has issues. Currently, paid apps cannot be seen in the Android Market, and there’s no support for 4G data, FM radio, nor HDMI connectivity in the RC1 release. Overclocking the your EVO on CM6 is said to destroy your battery, and Facebook sync is not working out of the box. You can find fixes to some of the issues in the CyanogenMod forums, but it’s going to be on you to find them and apply them.

Now that it’s no longer illegal to root your Android device, and rooting the EVO is easier than ever, feel free to give CM6 a whirl. If you don’t have a problem with losing the Sense UI, that is.

There are all kinds of reasons you'd want to hit up your local Verizon store and pick up a Motorola...