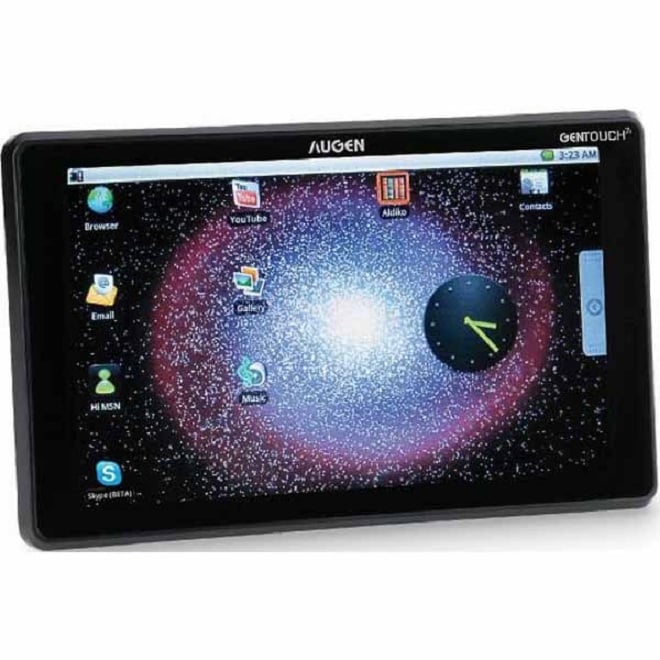 Whoa. The little-known Augen is bringing out a 7-inch Android tablet soon and a Kmart circular indicates it will only retail for $150.

That is not a lot of money of what this Android tablet is going to pack, as the product page says the device, dubbed “GenTouch78,” will rock the 2.1 version of the software, an unspecified 800 MHz processor, an 800 x 480 touch screen (no word on if it’s capacitive), 720p video support, 256 MB DDR2 RAM, an SD/MMC slot for up to 16 GB, WiFi, access to the more than 70,000 apps in the Android Market and the ability to play multimedia files and e-book files.

I have never heard of this company, which is not a good sign for the prospects of this Android tablet but the royalty-free nature of the OS means the tablet can come in at this cheap price. Is it going to be a credible competitor to the Apple iPad? I sincerely doubt Augen’s device will sell more than three million units but its cheap price gives it a puncher’s chance. Also, unless it’s really a clunker, it should provide an easy and relatively affordable alternative to Apple’s “magical” product.

While I firmly believe the Augen Android tablet will just be a footnote in the history of this class of devices, it could be an indication that we’re in store for a flood of tablets rocking the little, green robot. We’ve already seen the Dell Streak inch its way to the market (it’s kind of a smartphone too, so Marc is dubbing it a “smarblet”) and we know more devices should be hitting by the end of the year.

[Via Kmart, hat tip to Engadget]