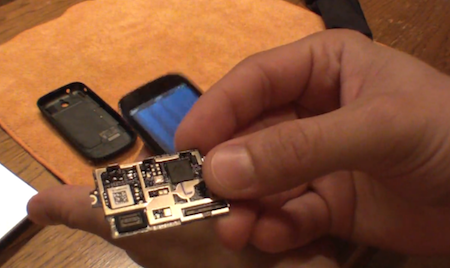 While the Palm Pixi isn’t exactly a raging success, hackers have still managed to throw a Wi-Fi radio on board the device for a little upgrade. It’s not often that we hear about hardware hackers: these days, all the hacking we ever hear about is jailbreaking this or cooking ROMs that. For fans of Palm and webOS, this hardware modification is pretty neat, and it also seems simple enough.

A user on PreCentral named gitit20 simply took the radio board right out of a Verizon Palm Pixi Plus and transplanted it into a Sprint Palm Pixi. And voila! The original Palm Pixi for Sprint is rocking a Wi-Fi radio, the exclusion of which caused a lot of head scratching amongst consumers and bloggers. Gitit20 told PreCentral:

Gitit20 reports that the two versions of the Pixi are virtually identical (excepting that WiFi chip) on the inside, all the way down to the Sprint Pixi not needing an extra GPS antenna to get its transplanted board a location fix. No serial numbers or coding  needed, apparently – just swap the boards and apply the Sprint webOS doctor. Unfortunately, Sprint Nav disappears and is replaced with Verizon Nav, which doesn’t.

If you really want Wi-Fi on your Sprint webOS handset, you’ll have to grab a Plus version from Verizon somehow and throw it into yours, but not without some sacrifices. Apparently, Sprint Navigation has to go and Verizon Nav takes its place, but if you hardly ever rely on GPS or navigation, you should be set.

While the Pixi has a great form factor and design, the hardware didn’t really do webOS much justice. Then again, some would argue that the Pre and Pre Plus didn’t, either, but that’s a whole other story. At the very least, this hack shows that the Palm Pixi can sport Wi-Fi for those who are desperate enough and capable enough for some DIY tweaking.

What time is it? It's time to get an  inPulse watch for your BlackBerry. Well, almost. We've seen this little...