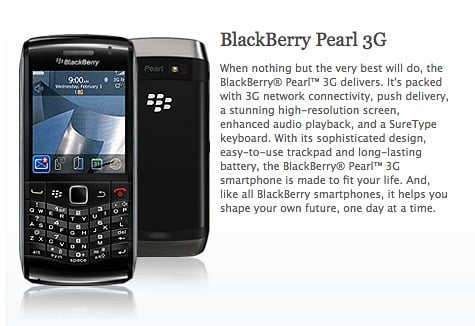 BlackBerry has been slowly rolling out new devices this year, and while it’s better late than never, the U.S. is finally getting the 9100 Pearl 3G. Who gets to claim first? Cincinnati Bell. After seeing the BlackBerry Pearl 3G at WES this year, we were almost certain that it would hit one of the big four carriers here, but this not-so-little carrier will be dishing it out before anyone else does. The handset will set you back $99 after a $100 mail-in-rebate, which isn’t too bad for this little guy if you’re a BlackBerry Pearl fan.

Don’t worry, the device will be hitting other carriers, too. After all, the FCC approved the 9100 and 9105 with AWS bands that both T-Mobile and Cincinnati Bell use, so we’ll likely be seeing some T-Mobile friendly units any day now. The handset packs Wi-Fi, GPS, a 3.2 megapixel camera, and a 400 x 360 resolution screen on a 2.44 inch display. All-in-all, it’s basically the Bold 9700 in a more compact form factor.

The Pearl 3G was initially announced at the Wireless Enterprise Symposium this spring alongside the Bold 9650. Rogers, Bell, and Telus all offered the BlackBerry 9100 shortly afterward, and even the far reaches of India has been privy to the smartphone before the U.S. What gives? It’s a great little phone, and I’d imagine all of the carriers would want to get it through testing as quickly as possible.

If you’re thinking of picking one up at the Cincinnati Bell store, be sure to take a look at our review first.

BlackBerry 9780 Taken Out for a Drive

We had seen a picture of the unreleased BlackBerry 9780 running OS 6 earlier this week, and now there are...