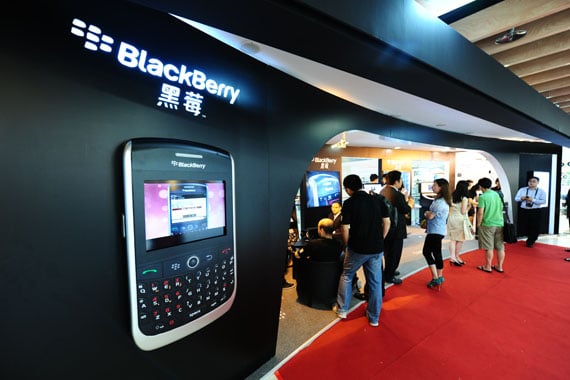 A brand new BlackBerry store just opened up in Beijing, China, offering visitors the full tour of the BlackBerry experience, and selling proper devices and plans for China Mobile right in store.  Of course, China Mobile only sells the BlackBerry 8910 and 8310 right now, but given the massive population density in the area and the new retail location, the China Mobile BlackBerry lineup may broaden quickly. On top of plans and devices, the store sells accessories like the BlackBerry Presenter, headphones, and cases.

This looks pretty swanky, and it’s a little sad that in North America all we have is a rebranded Wireless Giant store somewhere in Michigan. It’s a risky affair though; Nokia aggressively pushed branded retail presences, but shut many of them down over the last few years.  Maybe having a strong carrier presence in the store will help this BlackBerry location stay profitable, but they’ll still have plenty of local competition to contend with. HTC recently cemented their brand name in China, and have already toyed with branded support stations and retail stores in Malaysia and the Philipines. Even though there’s a lot of talk about Apple not being remotely interested in China, there was an iPhone stand spotted just across the hall from the BlackBerry store.

BlackBerry has been slowly rolling out new devices this year, and while it's better late than never, the U.S. is...