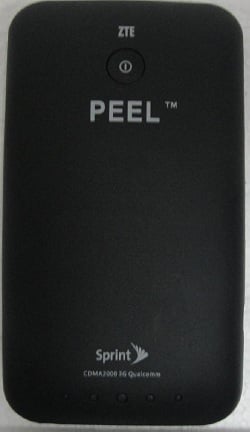 A device from Sprint just passed through the Federal Communications Commission, the Sprint Peel case, that might soon bring 3G connectivity to your Apple iPod Touch. This is the first time we’ve seen an iDevice accessory sleeve that actually endows it with a wireless data connection.

The device is manufactured by ZTE and it appears to slap on the back of your Apple iPod Touch. It can then use the Sprint EV-DO Rev. 0 3G network to bring connectivity wherever you take Apple’s multimedia player. The Peel basically doubles as a sleeve/case that also works as a portable WiFi hotspot. You can connec

The cool thing about the Apple iPod Touch is that you basically get all the functionality of the Apple iPhone but you get a slimmer form factor and no long-term contract because there are no cellular capabilities built into it. With the Sprint Peel, you’ll be able to access the more than 200,000 programs in the App Store on the go.

That’s where things really start to get interesting because one could potentially use the Sprint Peel case, Apple iPod Touch, a microphone and the Skype app to completely replace a mobile phone. With iOS 4.0, the updated Skype app will even be able to accept incoming Skype calls, allowing you to truly bypass any your wireless voice carrier. You’d probably be paying about $60 a month for Sprint’s mobile data service but it’s an interesting possibility.

The Sprint Peel case appears to be designed for the current generation of Apple iPod Touch devices, as it has a hole in the bottom for the headphone jack. I wonder what will happen when the new Apple iPod Touch is revealed this Fall, as the next generation is expected to have a physical redesign which includes a front-facing camera for FaceTime video calling.

It’s a little odd that the Sprint Peel is apparently an accessory for the company which makes the iPhone, as that device has led to many Sprint subscribers fleeing to AT&T. But this isn’t the first time Sprint has used Apple products in its promotions for mobile data, as it has been trying to make the case that its 4G Overdrive hotspot can do wonders for an Apple iPhone or iPad.

Check out the ad below.

Is Apple Reneging on Some Free iPhone 4 Cases and Bumpers? [update]

After the PR nightmare Apple suffered with the iPhone 4 antenna issues, Steve Jobs held a press conference to set...