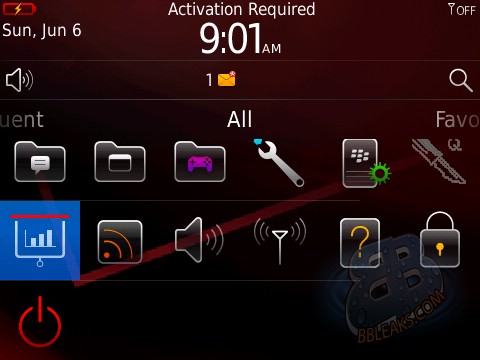 After seeing more of the BlackBerry 9780 this morning, I was getting worried that OS 6 would require particular hardware to run properly and that we would see little backwards compatibility, but as it turns out, the BlackBerry Bold 9650 on Verizon will indeed run the new operating system just fine. There’s been a lot of speculation that OS 6 will require at least 512 MB of memory, and as the 9650 was the first BlackBerry Bold, nay BlackBerry smartphone, to hit that mark, it would in theory be eligible for an upgrade. A new screenshot surfaced today, confirming that the Bold 9650 will get some OS 6 love from RIM.

For those just getting acquainted with BlackBerry 6, it’s updating a lot from what we know, including new universal search, categorized icons, and quick access areas for wireless connections and notifications.

We’re still not sure if those playing on relatively newer devices, like the 9700 Bold or 9100 Pearl will be left in the dark at 256 MB, but during the announcement, Lazaridis seemed to be drawing the line at trackball devices.  There’s been a rumoured list of devices to be supported eventually, but take it with a grain of salt.

Next week, we’re expecting AT&T to start showing off the BlackBerry 9800 slider, so hopefully we can squeeze some answers about OS 6 backwards compatibility then.

Looks like the first time we saw Froyo running on the Droid X wasn't fake, as now we're seeing more...