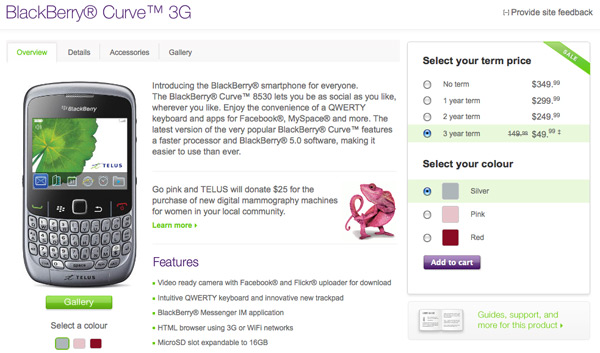 I’m not sure whether to chalk this up to a false alarm, or if this is the real deal… but the TELUS BlackBerry Curve 3G (aka the BlackBerry 9300, aka ‘Kepler‘) has shown up on the TELUS website for all to see. The funny thing is, TELUS appears to be listing the device as the Curve 8530… They do know that the 9300 and 8530 are different devices, right? 🙂

That said, I think we can chalk this up to a false alarm, for now. We haven’t received any official word from TELUS as of yet, and haven’t noticed any releases on the news-wires to date… Which leads us to believe that they’re simply prepping the site for an impending Curve 3G/9300 launch. We already know the device is coming in the weeks ahead, so we’ll have to keep our eyes peeled.

The Curve 3G, aka 9300, aka Kepler is for all intents and purposes a small update to the 8500 series. In fact, I think Simon put it best the other day:

…the BlackBerry 9300 (code-named Kepler) will be a microscopic upgrade to the 8500 series, offering the same screen, same camera, same app memory, same operating system, and just as much 3G as the CDMA 8530, only now for GSM carriers. Why on Earth Bell (and presumably Telus) would carry a CDMA and a GSM version of what is essentially an identical phone is still a huge mystery.

We’ve also heard the 9300 may be coming to Bell on August 12th. Lots of 3G/9300 goodness spinning around these days. Stay tuned to IntoMobile for much more on the apparently confusing update to the 8500 series.

McAfee buys tenCube, plans to make your mobile phone secure and easy to find in case it gets lost

McAfee, the brand Windows geeks know and mostly loathe, has acquired Singapore based tenCube with the intent to enter the...