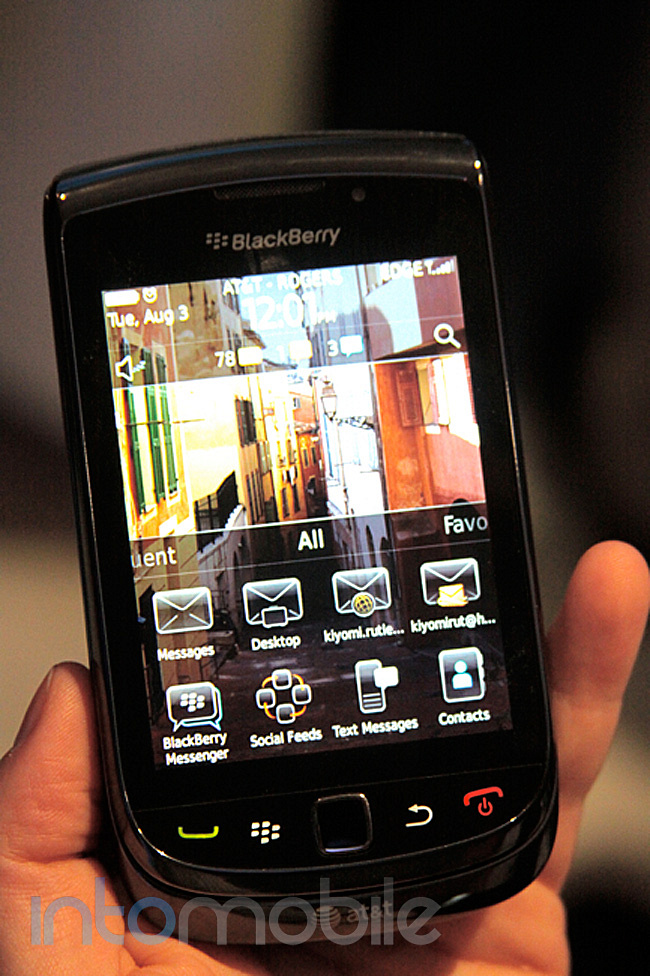 Today we were at RIM’s event in New York City to see its latest baby – the BlackBerry Torch 9800 for AT&T. It’s a bit of a departure from what you’d normally see from RIM: every single device it has ever made prior to the Torch was so unmistakable that from a distance, even look-a-likes could be confused with a BlackBerry. Its keyboard was prominent on its face along with a trackball or trackpad. And now, from a distance, I could confuse it with some LG slider phone if I wasn’t wearing my glasses. But that’s not to say I don’t like it.

The Torch 9800 was surprisingly light and well-balanced despite looking heavy, clad in metal, in all its pictures online. It’s thin, too, and feels good in the hand. While this isn’t the first touchscreen device from RIM, it is the first BlackBerry slider. My initial concern was that the slider would be flimsy, or it would have poor or wobbly travel. With most slider phones, it really is hit or miss, but the Torch is a hit. Up or down, it slides very smoothly and locks in the open or closed position with a satisfying click.

Build quality feels good and as solid as we’ve come to to expect from BlackBerry devices. I saw plenty of older Curve handsets in the crowd that have clearly taken a beating, yet still working and firing away like tanks. The slider feels like it could survive a hundred thousand slides and clicks and feel like it did out of the box.

Being thin as it is, you might not expect the keyboard to feel so comfortable, unlike the very comfy keyboards on the Bold 9700 or BlackBerry Tour, but you’d be wrong. Our very own Daniel Perez said, “This keyboard actually feels really good. I have plenty of space when holding it with two hands, and the keys are spaced perfectly. My thumbs don’t feel cramped or too close together.”

I agree with Daniel.

Overall, the hardware was very nice, except for one glaring thing: the screen. When the Bold 9000 was released, the screen was a thing of beauty. It made all other BlackBerry handsets before it seem archaic–like going from a CRT TV to a flat screen plasma. However, in the two years since the 9000 launched, handsets like the Motorola Droid and iPhone 4 have hit the scene, both rocking 854 x 480 and 960 x 640 screens, respectively. The BlackBerry Torch 9800 is still stuck in 2009 with a 480 x 360 display, which is decent for its 3.2″ in size diagonally, but nowhere near as crisp as what we’ve seen on the market today.

Now, onto the software. While we didn’t have have too much time with the device, what I can say about the software is that it seemed to run perfectly fine. That is, I didn’t have to wait too long, if at all, for any action or event to happen and just about everything I did on the keyboard or screen was instantly responsive. BlackBerry OS 6 isn’t such a huge departure from OS 5 that new users will be confused and uncomfortable, but there will be a slight learning curve all over again.

The new OS 6 now arranges icons on the lower section of the screen by your most used apps, favorites, media and others. To switch between the categories, simply swipe left or right on the screen and a new set of icons will slide into place. Messages, e-mails, Twitter alerts and the like are now placed on a bar near the top of the screen where you can tap and view its content.

Perhaps one of the biggest and most convenient features is universal search. All you have to do is slide the screen open and just start typing whatever it is you want to find. Whether it’s an e-mail, contact, web search or more, you just start typing — no need to select any application or feature to search. Just type.

So, after these first impressions, is it safe to say that this new device and OS will save RIM from customers wanting to flee? Could it possibly steal Android and iPhone users away from their beloved handsets? The answer is probably not and definitely not. It’s a nice handset that brings some nifty new features, but after our admittedly brief time with it we really can’t say we’ll be giving up our beloved Android and iOS handsets for now.

There is a lot more to cover on the BlackBerry Torch and OS 6, but we’ll save all the dirty details for our full review of the device coming very soon. For now, enjoy these few pics we took at the event and be sure to check the official press shots and device details in our announcement post.

The U.S. and Canada aren't the only ones getting RIM's latest little bundle of techno-joy. The BlackBerry Torch 9800 is...