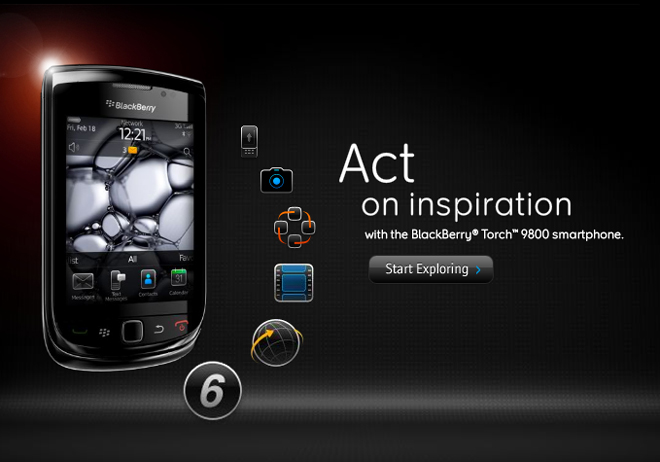 AT&T is all official with the BlackBerry Torch 9800, and now RIM is stepping in from the software side. The main features (like universal search, updated browser, feeds, and new user interface) are demoed on their new BlackBerry 6 minisite with the help of some short video clips. An especially juicy morsel in the press release tells us that the Bold 9700, Bold 9650, and Pearl 9100 will all be updated with BlackBerry 6, pending carrier testing and approval, of course. I think it’s safe to assume that the older BlackBerrys will be out of luck.

For developers, RIM has announced the BlackBerry 6 software development kit, though old apps will apparently run just fine on the new OS. Developers will probably want to make some updates to take advantage of unversal search at very least, and any of them working with location in any way will be interested in the Wi-Fi geolocation, reverse geocoding , and estimated travel time APIs. There’s also the new Webkit browser which will enable web app developers with HTML5 support.

The BlackBerry 6 flagship device, the Torch 9800, has a 5 megapixel camera, 3.2″ HVGA non-SurePress touchscreen, Wi-Fi b/g/n, world roaming 3G, and GPS. Of course, the software’s the real star of the show, which I think will revitalize a lot of old BlackBerry fans.

Developers can head over to BlackBerry’s Java page to download the SDK and get started, and if you’ve got the time, read my pre-announcement analysis of what the Torch means for RIM.