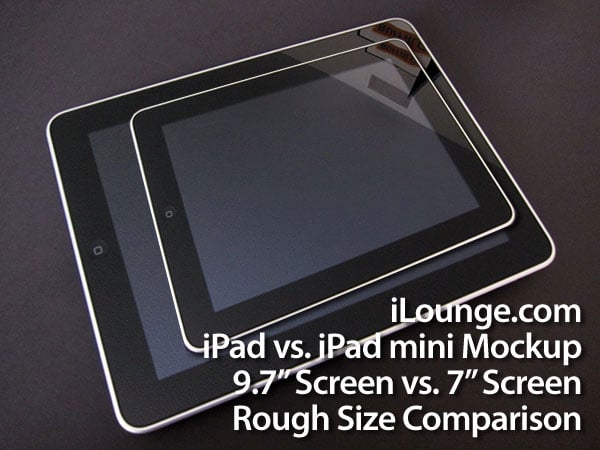 New whispers of a next-generation iPad “Mini” and iPhone 5 have just been uttered online, and they hint at new Apple hardware hitting market in early 2011. Now, before we go any further, we’re filing this speculation in our “rumors so shaky it hurts” file, so it’s probably a good idea to take all this info with a heaping spoonful of salt. According to the rumor, we’re due to see Apple launching a smaller iPad and moving up the launch window of the iPhone 5 up by several months.

The refreshed iPad speculation makes no mention of the camera (either front- or rear-facing) that we’ve been hearing will be released in the November/Fall timeframe, but does say that Apple is preparing a 7-inch version of the iOS-powered tablet device. The smaller iPad has apparently been in prototype testing for a while, perhaps even before the original iPhone was launched back in 2007. This rumor has some teeth to it, because there has been much talk about a new iPad model coming down the pipeline. We’ve also heard other rumors mentioning that the tablet idea was put on the table before even the iPhone.

Now, the shadiest of the rumors has to do with the next-generation iPhone. Sure, the iPhone 4 has barely gone live, and Apple is still having trouble keeping up with demand, but that doesn’t mean Cupertino isn’t already planning their next big smartphone. We’re hearing that Apple will be releasing a new iPhone in early 2011, possibly January. Word has it that the launch date was pushed up to deal with the antenna issues currently plaguing Apple’s PR team.

Not to add fuel to the iPhone rumor-fire, but we’ve also heard from our own source that Verizon is gearing up for a major product launch either end of 2010 or in January 2011. Some say its the Verizon iPhone. Others say its the Motorola tablet. We’re not sure, but a January launch of a new iPhone sure does coincide with this latest rumor.

Like we said, take these rumors for what they are – rumors. We’ll have to wait several months before we get a better handle on the speculation.