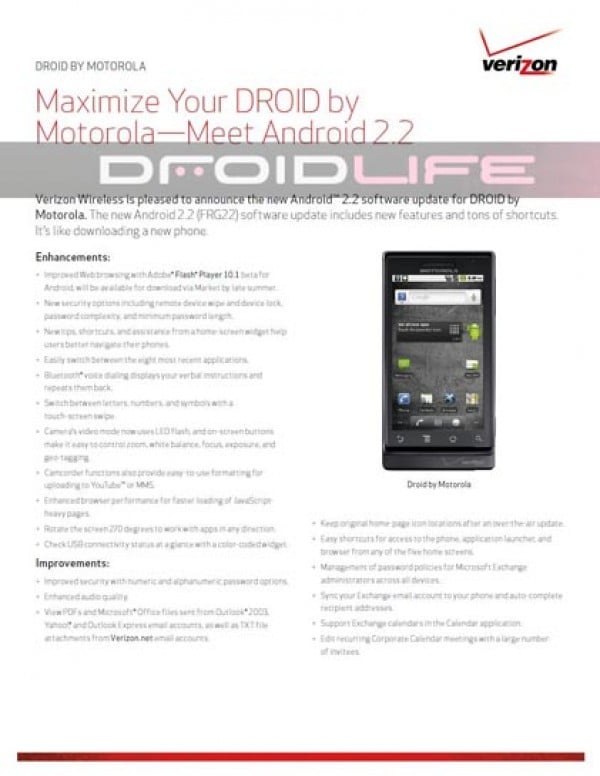 It was only a couple of days ago when we got our first leaked build of Android 2.2 (Froyo) for the Motorola Droid for your installing pleasure. There’s a new ROM floating around now, and this one looks to be the real deal, as in the official build Verizon will start pushing to handsets soon.

The new ROM build, named FRG22, is a step up from the original FRG01B, which apparently fixes a bug that had not been addressed in the first leaked build we saw. Droid-Life managed to get their hands on an internal Verizon document, and it refers to the upcoming official Froyo update by its FRG22 build number FRG22. If that’s not enough supporting evidence to believe that this ROM isn’t the official one, I’m not sure what is. We’re glad to see that this build won’t be followed by a sting of other test builds, like we saw with the Nexus One. Droid owners can install this, and not have to worry about something newer coming out, hopefully.

Now that the official ROM is apparently out, we should be seeing Droid 2 hardware going live sometime soon. Hopefully the August 12th date pans out, as that’s just one week from today. If that does turn out to be true, Sprint may pull a Verizon and release their Samsung Epic 4G a day before the launch of the Droid 2, just like Verizon launched the Droid X a day before the launch of the iPhone 4. Maybe Sprint’s trying to give Verizon a taste of its own shady medicine, but the Epic 4G is definitely something you’ll want to consider before jumping out and buying the Droid 2.

If everything holds up, we’ll have two great QWERTY keyboard toting Android smartphones to choose from. Which one is right for you?

Head over to Droid-Life to get your FRG22 on now!