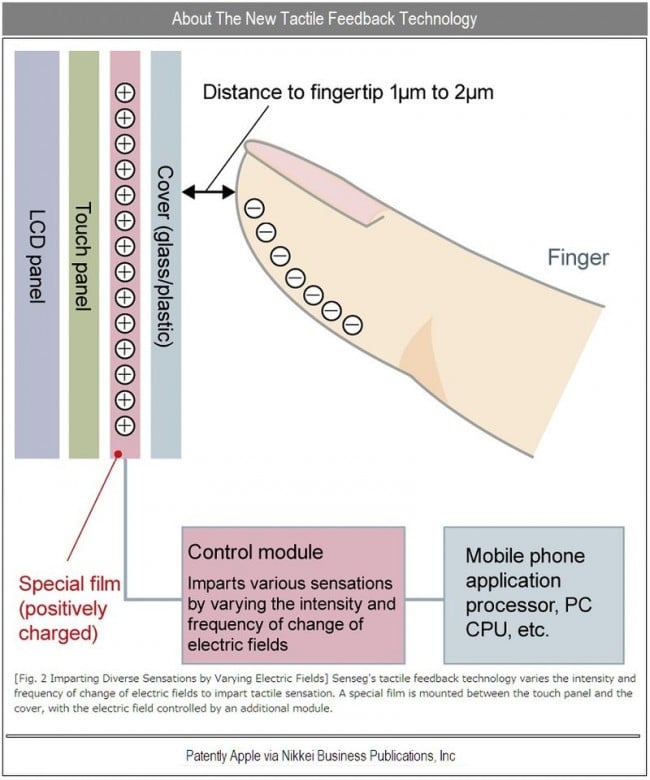 We’ve been looking for the folks at either Apple or Nokia to bring true haptic feedback technologies to devices like the iPhone and iPad – technologies that would allow for tactile feedback on a touchscreen that is capable of emulating the real feel of buttons and variable surfaces. Well, a tech demo from Senseg shows off Apple’s iPad and iPhone working with a new kind of feedback system, known as Senseg E-Sense, that uses electrical charges to change the feel of a touchscreen. Given that the demo was conducted on an undisguised iPad, it’s possible that the iPhone maker is seriously looking at localized haptics for their next-generation iDevices.

Before we go any further, you might be asking yourself what the heck “localized haptics” or “tactile feedback” means. As Wikipedia puts it:

The word haptic, from the Greek ??????? (haptikos), means pertaining to the sense of touch and comes from the Greek verb???????? haptesthai meaning to “contact” or “touch”.

Tactile feedback is a general term used to describe any touch-based sensation. In the phone world, tactile feedback can be used to describe the way a button clicks when pressed by a finger to the way a phone vibrates to indicate that a key has been depressed. Many times, we use the term “haptic feedback” interchangeably with “tactile feedback” – especially in relation to phones that vibrate to signal that the user has pressed a virtual button on a touchscreen. The future, though, is in “localized haptics.”

Truely localized haptic feedback systems won’t simply vibrate the entire handset when a key is pressed. While vibration feedback might be somewhat useful today, the technology is crude and mostly just a compromise until localized haptics come online. With the next-generation of haptic tech, touchscreens on smartphones will be able to vary the way the surface of the display feels under a user’s finger. The changes are localized to the area directly underneath the finger, rather than affecting the entire device or display – as we see with current technologies. If you press down on a virtual key on the screen, you’ll feel the key in a way that feels different from the rest of the display.

In the interest not getting bogged down in the specifics of haptics, let’s move on. The tech demo that we mentioned at the beginning of this article showed off a new kind of haptic technology that uses electrical charge the change the way a smartphone touchscreen feels. By applying variable charges to a film, the technology can create different sensations for different parts of the display. What’s more exiting is that an iPhone and an iPad are used to demonstrate the Senseg E-Sense tech. The iPhone was partially disguised during the demos, but the iPad was mostly out in the open, for all to see. The implication here is that Apple might be considering using this E-Sense technology in upcoming iDevices.

As you can see from the video below, the display can mimic the feel of wood surfaces, rocky surfaces, soft surfaces, and rough surfaces. Better yet, the E-Sense film can mimic all these different surfaces at the same time in different areas of the display. The film can even be applied to the backside of a device to add another dimension of haptic feedback for the user.

We’ll be anxiously awaiting the day when these kinds of tech make the jump from demo and prototype to actual production hardware. Apple, Nokia, we’re still look at you.