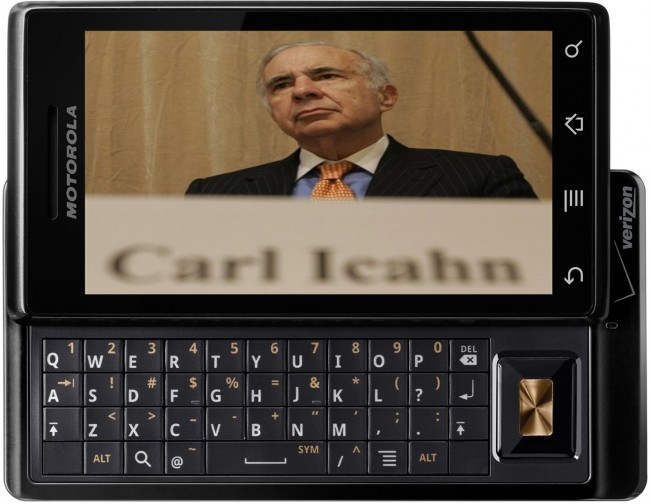 It looks like there’s a new sheriff in Motorola’s town, as billionaire invest Carl Icahn has purchased the biggest stake in the company.

According to the Associated Press:

Icahn and his group purchased 10.2 million common shares of Motorola this week at $7.62 per share, boosting his stake to 9.99 percent from 8.75 percent in May. His holdings now exceed that of Dodge & Cox’s last reported ownership stake of 9.9 percent, according to a March proxy statement. Icahn owns 232.2 million shares compared with Dodge & Cox’s 228.7 million shares.

Icahn has already been influential in how Motorola was run, as his proxy fight gave his reps two seats on the board of directors. Icahn is also well-known for pushing the company to spin off its struggling cell phone division into its own public company.

The Motorola split is still set for the first quarter of 2011 and the Enterprise Mobility company will focus on things like point-of-sales machines, barcode scanners and police radios. It won’t make networking equipment, as this division was recently sold to Nokia Siemens for about $1.2 billion.

So, what can Icahn look forward to with the independent cell phone Motorola? Well, the company is still trying to recapture the magic it used to have with the Razr and handset CEO Sanjay Jha has cleaned house and focused the company on Android. The Motorola Droid, Droid X and Droid 2 are expected to be huge hits but its other devices haven’t been quite as successful.

Motorola’s Android plans appear to be solid, as its high-end devices are selling well thanks to a strong marketing push by Verizon and it has a variety of other form factors on multiple carriers. It may be too reliant on being Verizon’s handset maker of choice, as Research In Motion can tell you that Big Red can be fickle with its halo devices.

That may be why we’ve heard signs that Motorola is sniffing around Windows Phone 7. It’s smart to keep all your bases covered.

HTC is driving Android's rise and is leading the pack with its myriad of handsets including the popular Verizon HTC...