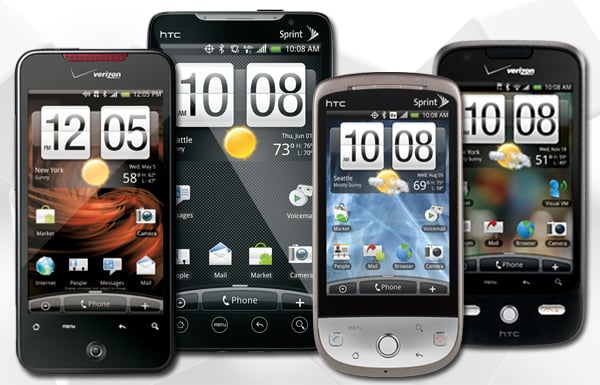 The four HTC mobile phones are a motley group and include the Eris for Verizon, the Hero for Sprint, the Incredible for Verizon, and the EVO 4G for Sprint. The 2nd, 3rd, 4th, and 5th best-selling Android phones are a nice mix of old and new handsets which suggests that new smartphone owners are not always looking for the latest and the greatest device.

While HTC enjoys its success, Motorola is starting a campaign in this current quarter that may unseat HTC from its prime position. The smartphone maker continues to struggle with manufacturing delays and shortages of both the Incredible and the EVO 4G. It’s an unfortunate situation that will effect the overall sales of the copmany’s two flagship handsets. While the Taiwanese manufacturer scrambles to keep up with demand, Motorola is riding a tidal wave of positive publicity and success with Verizon Wireless. The US manufacturer recently introduced the very well-received Motorola DROID X on Verizon and is expected to launch the highly anticipated DROID 2 with Big Red in mid-August. When the current quarter ends in the fall, we may be saying goodbye to HTC and “Hello Moto” as we crown a new champ – as far as breadth of best-selling Android smartphones is concerned.

While you wait anxiously to see what happens in this handset race, you can pass the time by checking out our hands-on reviews of the Sprint HTC EVO 4G and the Motorola DROID X as well as head to head battles and our Superphone Shootout.

We knew it was coming... so If you've been waiting for the HTC Desire to hit Canadian shores, wait no...