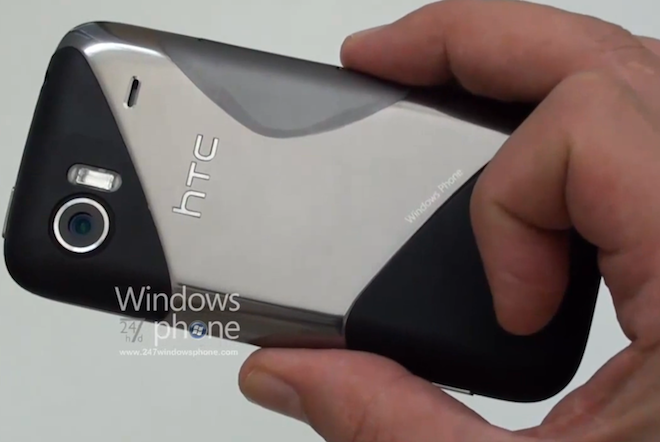 Below we have a video recorded by Windows Phone 24/7 that purportedly showcases the HTC Schubert. Its funky design is mostly metal, but wrapped in rubber at several slanted angles, most likely to increase signal reception. There’s practically no information associated with this device, except a hunch from the leaker that it will be one of the first Windows Phone 7 devices to hit the market.

Knowing Microsoft’s heavy hand when it comes to defining system specifications, and HTC’s usage of one particular platform, but in various different form factors, it shouldn’t be too much of a stretch to say that this bad boy will have a 1 GHz Qualcomm Snapdragon.

Curiously, our information tells us that the first Windows Phone 7 is was going to be the HTC Mozart. Notice the code names are both names of famous composers? HTC has a way of doing that when creating a product family. The Schubert is most likely one of many devices to feature Windows Phone 7 coming out of HTC. One will probably have a large 4.3 inch screen, one will have a smaller 3.7 inch screen, one will have a keyboard, these are all guesses by the way, but educated ones since a small company like HTC typically uses the same components over and over and over again.

Which isn’t to say it’s a bad strategy, we’re just curious to see how they’re going to stack up against the likes of Asus, Samsung, and everyone else making a Windows Phone 7 device. How exactly is HTC going to customize the software layer? HTC Sense isn’t going to be allowed, or at least that’s what we were told behind closed doors at Mobile World Congress earlier this year.

Not much the company can do except … make solid devices, for low prices, and ship them in enough quantity to stave off a shortage.

Frash, the application that brought Flash to the iPad, has been ported to the iPhone 4 and other iOS 4...