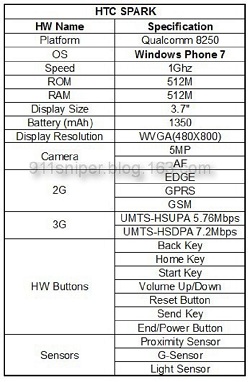 Well, it looks like some specs have leaked out regarding an upcoming Windows Phone 7, as the spec sheet leaked out for the supposed HTC Spark.

As you can see from the pic above, the HTC Spark is supposed to be a Microsoft Windows Phone 7 device that has a 1 GHz processor, a 3.7-inch touch screen with WVGA resolution, a 5-megapixel camera, 3G, and all the other things you’d expect from a device like this including proximity sensors and light sensors.

WMPoweruser points out that the hardware buttons may make this HTC Spark spec sheet leak a bit fishy, as we’ve heard that Microsoft Windows Phone 7 phones will require at least mechanical photo button, search, back and home keys.

If the HTC Spark turns out to be a real Microsoft Windows Phone 7 device it looks like it will have some solid hardware. Of course, the big appeal of the the new platform will be the software itself.

We’ve had a chance to take a look at Microsoft Windows Phone 7 and have been quietly impressed. The new user interface shows some true innovation, as it moves away from the icons-in-a-grid layout that has become commonplace. Instead, it focuses on a live “hub” system which integrates data into a series of tiles.

The touch screen was pretty responsive, the mail integration was cool and we’ve even seen some cool Microsoft Windows Phone 7 apps.

Unfortunately, the problem might be too little, too late. Microsoft Windows Phone 7 does a lot of good things but nothing great yet. The Apple iPhone is rolling along like a freight train, Google Android is becoming stronger by the day and Research In Motion has added some visual panache to its still-strong BlackBerry OS. Devices like the HTC Spark could help move the need for Microsoft, as could device like the Dell Lightning.

[Via TwitPic, hat tip to WMPowerUser]

One of the most anticipated HTC Android devices has got to be the Desire HD, otherwise known by its HTC...