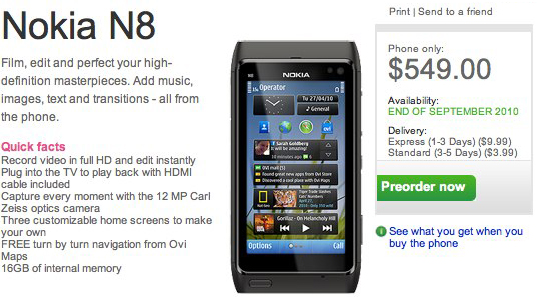 Eager to get your hands on Nokia’s first Symbian^3 handset? Good news as the flagship handset just became available for pre-order on Nokia’s US website. The N8 will set you back a cool $549 and boasts of five-band WCDMA 850/900/1700/1900/2100 capable of running on either AT&T or T-Mobile in the US. The N8 was rumored to be shipping on September 25th and Nokia’s pre-order launch date of late September fits in nicely with this rumored date.

Announced back in April, the N8 is part of Nokia’s attempt to win back the smartphone crowd which is dropping Symbian in favor of the iPhone and Android. The, now infamous, first hands-on preview of a prototype N8 was not very kind to the struggling smartphone platform . In his scathing review, Murtazin deemed the flagship handset and Symbian^3 an embarrassment to Nokia. Nokia responded by lashing out publicly against Murtazin on its Conversations blog and legally with the help of the Russian police.

All this high-tech drama back in July served to focus attention on Nokia’s bullying tactics and away from Murtazin’s poor review. Now that the N8 will be in the limelight again soon, let’s hope Nokia had used this intervening time to iron out any kinks. Though it won’t necessarily wow us like the iPhone 4 or the DROID X, let’s also hope the N8 will be competitive.  More than any other manufacturer, Nokia needs a winner.

Nokia fans outside of the US looking to hop on the N8 bandwagon can do so as the pre-order in the US is part of a larger, global push which includes France, Poland, Germany, Italy, and more. If you plan to add this Symbian smartphone to your repertoire of handsets, hit us up in the comments and let us know what feature you are looking forward to the most.

[Via Slashgear and Nokia]