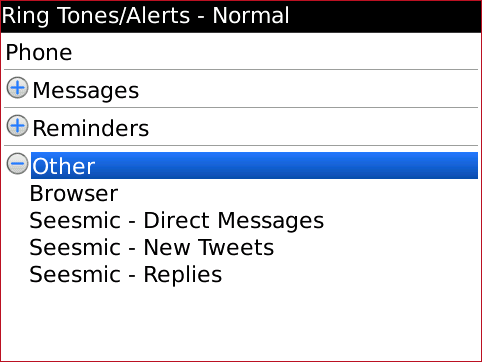 UberTwitter isn’t the only BlackBerry Twitter client getting some fresh features. Although it’s not quite as big of a patch, Seesmic now includes integration with native Profiles, so you can set particular tones or vibrations for when you recieve Twitter mentions, direct messages, or load new tweets while any given profile is active. Additionally, there’s now support for Ping.fm groups, a few user interface tweaks, locally-saved picture thumbnails, and a security update to work with Twitter’s XAuth.

The last significant update to Seesmic for BlackBerry was awhile ago, but including support for multiple accounts was probably enough to put it ahead of the official Twitter app. Seesmic’s first home was in the web browser, but it has since spread to BlackBerry as well as iPhone and Android. Download links to all three are below.

BlackBerry Torch Half Off: Only $99.99 from Amazon

This morning I suggested that perhaps very lukewarm BlackBerry Torch sales might be bolstered by lowering the price. And what...