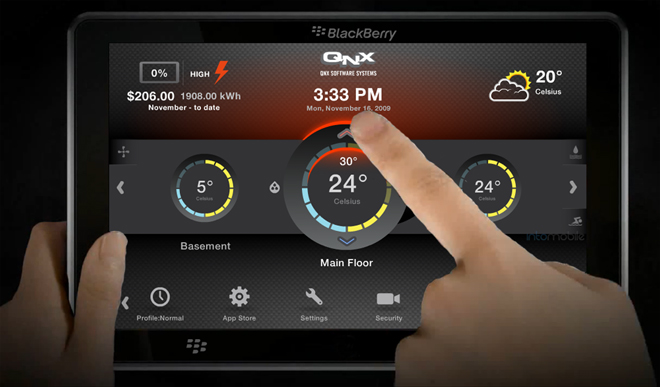 Details of RIM’s rumoured BlackBerry tablet have been scarce, especially what kind of software it will be running. We presumed that it would be some exploded version of BlackBerry 6, but apparently a recent acquisition of RIM, QNX, will be taking the reins for the operating system.

From what we’ve heard so far, the “BlackPad” will have dual cameras, a 1 GHz processor (which sounds a bit unlikely given RIM couldn’t even raise the bar for the Torch), with size estimates ranging from 7 inches to 8.9 inches, and Wi-Fi and Bluetooth to connect to connect to a BlackBerry as a companion device. Rumour has it the BlackPad will go for about $499 sometime in November.

The first thing a lot of people looked at when RIM bought the Ottawa integrated software company was their work with car systems, which was reinforced by RIM trademarking “BlackBerry Drive”.  QNX’s work with LTE-connected cars and unmanned iPhone-controlled tanks is definitely impressive, but barring the likely scenario that RIM is more concerned with making a BlackBerry-connected vehicle companion than a casual computing device, I’d like to think the BlackPad will capitalize on QNX’s experience with the connected home. They’ve worked on concepts (above) that let you monitor your home’s energy usage, remotely turn off lights, adjust the temperature, check security cameras, take a look at the weather, and show pictures from Flickr, presumably to use as a digital picture frame. This seems like an ideal, generic usage of the tablet form factor which would put it head-to-head with the iPad, though if RIM could cram that in with some solid in-car capabilities and e-mail viewing shunted over from a paired BlackBerry, the BlackPad could actually be pretty sweet. Then again, maybe that’s just wishful thinking.

P.S.: Picture is a mockup based on the HP Slate. Their marketing team gets a big ol’ fail for having two left hands in this shot.

The last we had heard regarding a BlackBerry ban in India suggested partial access to BlackBerry Messenger data had been...