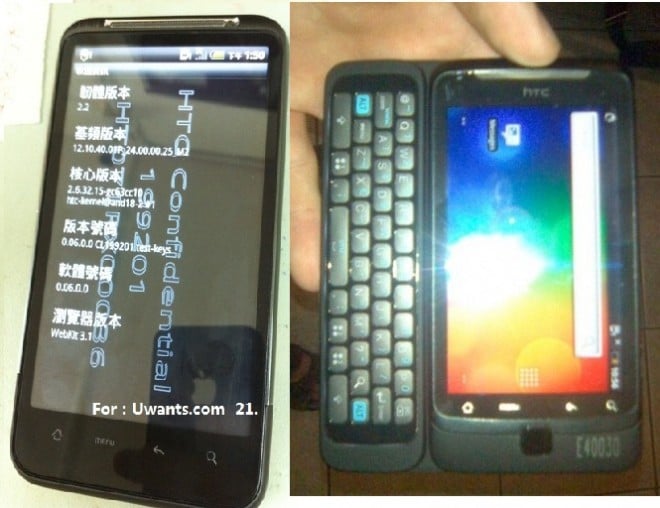 It’s becoming clear that HTC plans to unveil some new Android smartphones at their press event on the 15th of September. Two new smartphones briefly appeared on mobiles.co.uk, bearing the names of the HTC Desire HD, and Desire Z. What ever could they be? We’re thinking these two handsets will be launched at the upcoming mid-September HTC event.

According to the posting on the British website, the HTC Desire HD is said to run Android 2.2, sport a 4.3 inch display, and a 1GHz processor. This sounds pretty familiar, does it not?  The Desire Z will sport a 3.7 inch display, and will come with a slide-out QWERTY keyboard. Unfortunately, this device may be running Android 2.1. HTC hasn’t always been the best at keeping their phones under wraps, and this tradition remains true to this day. I’d find it very hard to believe that HTC will announce something other than these two device when September 15th comes around.

I believe these two devices are the European equivalents of the yet to be announced T-Mobile G2 (DZ) and the MyTouch HD (DHD). It just makes too much sense for them not to be these devices. I’d expect the DZ and DHD to both be running HTC’s Sense UI. Afterall, HTC Desire was pretty much a Nexus One with slight hardware tweaks and the Sense UI running on top. I expect these two upcoming devices to be HTC’s own European variants of phones that will hit Magenta in the coming months.

Mobiles.co.uk shared a brief description of the devices:

The HTC Desire HD runs the latest Android 2.2 Froyo operating system on a stunning 4.3 inch touchscreen display. Powered by a 1GHz processor, the Desire HD is capable of running multiple applications with ease. Use Android to customize your phone with exciting new apps and interactive shortcuts and stay close to the people that matter with HTC Sense UI providing live updates from all your favorite social networks. Formerly known as the Ace, the Desire HD boasts a stunning 8 Megapixel camera with 720p HD video capture, and free voice guided SatNav with Google Maps.

The HTC Desire Z combines a vivid 3.7 inch touchscreen display with a slide out full QWERTY keyboard making it perfect for browsing the web and messaging friends. Running Android 2.1, users can download new apps, customize the user interface with interactive shortcuts and transform their Desire Z into a SatNav with free turn by turn voice navigation from Google Maps. Powered by a 1GHz processor, the Desire Z also sports HTC’s Sense UI which keeps you up to date with all your friends thanks to live updates from your favorite social networks. Also included is HSDPA and Wi-Fi.

Sounds about right. If these devices are indeed coming to us on T-Mobile, I would expect to see a slight hardware design change, especially the Desire HD. If it becomes the MyTouch HD, it will likely retain the overall look of the MyTouch Slide’s button configuration, including Genius, but will lack the physical keyboard, and have a bigger display. The T-Mobile G2 may more closely resemble the DZ, as it’s not marketed as a MyTouch device, but I wouldn’t be so surprised if we saw some hardware tweaks here and there. Project Emerald, anyone?

This is all still a big rumor, of course, but we only have a couple of weeks left to continue pondering as to what these devices will be. For now, we’ll keep having fun with our speculation.