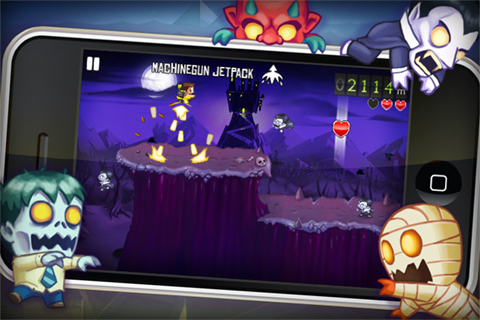 Ever since Canabalt hit the iPhone scene almost a year ago, there have been a number of similar titles hitting the App Store. Probably the most notable one was EA Mobile’s “Mirror’s Edge” which played very similar to Canabalt, but it added much more in terms of its gameplay, story, and fighting mechanics.

Halfbrick’s latest game, Monster Dash, could be considered another Canabalt clone, but it has a number of enhancements that can set it apart from other games that offer a similar experience.

As in Canabalt, the whole premise behind Monster Dash is to guide your character, Barry Steakfries, across the playing field to see how far you can take him without dying. The game has you jumping not only over gaps, but over dangerous spikes and monsters as well. Jumping around a level could get quite boring, so Halfbrick armed Barry with a number of weapons. Barry’s default weapon is a pump-action shotgun that can only reach a short distance in front of him. As you make your way through a level, crates will be made available that contain a new weapon. Each weapon has a certain amount of ammo until the weapon becomes uselessly, which results in reverting to using the shotgun.

Each time you play Monster Dash, your starting level and its design is randomly generated. Each level has its own theme as well as its own monsters that inhabit the level. When you reach 1000m, Barry is teleported to another level, which continues until the game ends. Barry has a health meter of 3 hearts that go down if he’s attacked by a monster or comes in contact with spikes. If he falls off a level, the game comes to an end.

FINAL THOUGHT: Monster Dash is one of those games that you can pick up and play for 5-10 minutes, or waste hours trying to reach a high scoring distance. The game also supports score bragging on Facebook & Twitter, as well as OpenFeint with full leaderboards and achievements that give the game a lot of replayability.