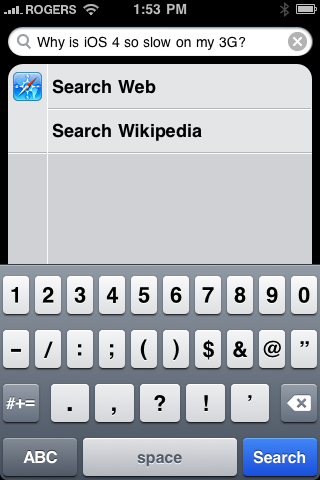 If you’ve got an iPhone 3G kicking around as your daily driver, or as part of your mobile arsenal… chances are you’ve been waiting on Apple to fix iOS 4 for you. iOS 4 and the iPhone 3G don’t get along. It’s a fact. If you’ve upgraded, you’ve no doubt noticed the terrible kick in the groin in speed, performance and overall usability. After installation of iOS 4, you’ll immediately notice a bog-down, and heck, even apps that once loaded with speed will sometimes take minutes to load, only to crash. Not good… not good at all.

Well, it appears the light at the end of the tunnel is getting brighter.

Steve Jobs has allegedly told an iPhone 3G user that an iOS 4 update is coming down the pipes for the iPhone 3G. The update should address many performance issues on the device.

In a frustrated email, said iPhone 3G user sent the following comments off to Jobs himself:

I’ve waited patiently through 4.0.1 and 4.0.2, looking for a fix that will make my phone work again. I’ve read the forums that advise me to jailbreak my phone or use some other method so I can downgrade back to a version of iPhone 3, however I’m not prepared to use a method that is not supported by Apple.

…and the typical succinct Jobs reply:

So there you have it. I guess this isn’t anything new, but when you hear from the leader and figurehead of a company telling you a fix is coming soon… you have to take note of that, right? The only question remains… HOW SOON?

If you’re still having issues with iOS 4 on your iPhone 3G… try turning off your spotlight search options. If that doesn’t work, you can always perform a downgrade.

While Apple's gated entrance into the App Store does prevent the proliferation of malware and poorly written applications, it also...