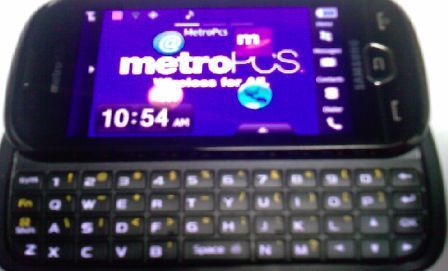 MetroPCS has already confirmed their first LTE handset to be the Samsung Craft, seen also passing through the FCC. We’ve got some pictures now, and unfortunately they reveal that it’s using the same flavour of TouchWiz as the Caliber – no Android here. As far as connectivity goes, the Craft will run on dual band CDMA, AWS, and LTE. You’d think with such a high-speed network, MetroPCS would want to offer hardware that could properly take advantage with a high-end screen and data-rich applications, but who knows what else they offer by the 2011 launch.

Though the hardware isn’t especially impressive, MectroPCS’s LTE network is going to be worth keeping an eye on. It’s starting in Las Vegas  and Dallas Fort Wort. As a smaller carrier, they’ll have an easier time rolling out an LTE network, but the lead will be short-lived once Verizon musters up the momentum to make the switch. The Samsung Craft should be going for about $300 when MetroPCS starts selling it next year. I cringe to think of what they’re going to charge for proper smartphones.

Another Windows Phone 7 offering has reared its ugly head and is available for world to see. Shot through the...