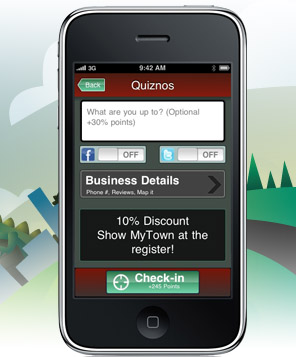 Booyah announced that its location-based mobile service has crossed the 3.1 million registered users mark. In addition, the company said that its users check-in to the app more than 15 million times each week across both rural and metropolitan areas throughout the United States. In total, MyTown had around 400 million check-ins in the country in the last six months, making it the largest location-based app in North America. And in case you wonder, the top 5 location types are restaurants, grocery stores, K-12 schools, clothing stores and gas stations.

As you probably know, MyTown works pretty much like Foursquare and Gowalla allowing its users to check-in at real-world locations to unlock rewards. They [users] can purchase, upgrade and collect rent on their properties, enjoying MyTown ownership of their favorite real-life places.

Recently, Booyah launched international support for the mobile app bringing MyTown to the United Kingdom, Australia and Canada, with support planned for other countries coming soon. Additionally, MyTown has also recently got the product check-in feature using which users can scan barcodes of real-world products to unlock points and earn virtual items.

After seeing the first augmented reality enhanced magazine (Sueddeutsche Zeitung), we have great use of AR technology to share... During...