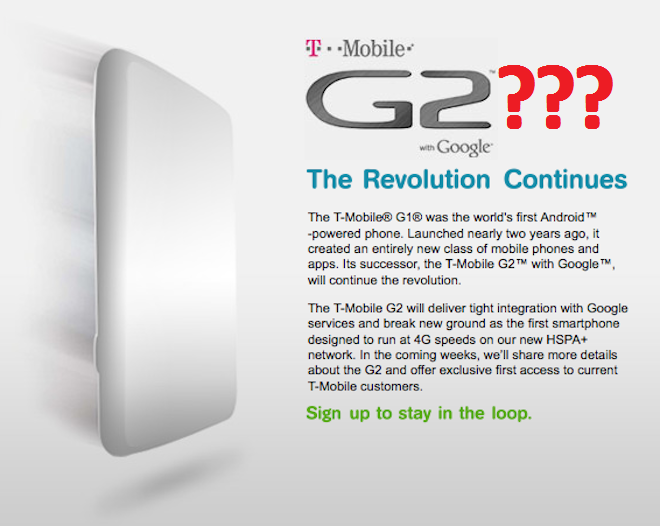 A smartphone with HSPA+ capabilities for T-Mobile has just passed through the Federal Communications Commission and this looks to be the much-heralded G2.

The device came through the FCC as the “HTC PC10100” and it sports 802.11n WiFi, 3G for T-Mobile’s AWS bands and references to HSPA+. We know that T-Mobile has been pushing the G2 as the first smartphone with HSPA+.

We’ve also seen the T-Mobile G2 in the wild and the release date is expected over the next few weeks, so I’d bet dollars to doughnuts that this is the device that has just passed through the federal agency. The followup to the first Android handset should be a good sequel with its large touch screen, high-speed mobile data, modern design and more.

The HSPA+ capabilities could be a key difference-maker for T-Mobile, as the G2 should be able to get up to 21 Mbps download speed. By comparison, Sprint is offerings WiMax 4G in multiple markets but most real-life tests indicate this gets about 6 to 8 Mbps. T-Mobile has even talked about doubling the HSPA+ speeds in the near-future.

This is going to be a good period for Android fans, as there should be an incredible little, green robot on every major carrier. The Motorola Droid X is moving units for Verizon, AT&T fans can buy the Samsung Captivate, T-Mobile will soon have the G2 and Sprint subscribers can choose between the EVO 4G or the Epic 4G.

The only thing that gives me pause is that Engadget points out that this could very well be the HTC Glacier, which is also expected to hit T-Mobile later this year with HSPA+ support. This device should be one of the first smartphones to have multiple cores, which should give it some good horsepower.

What do you think friends? Is the G2 going to be your next phone?

Google is defending its Android License Server solution for combating app piracy despite the high-profile end-around that has surfaced lately....