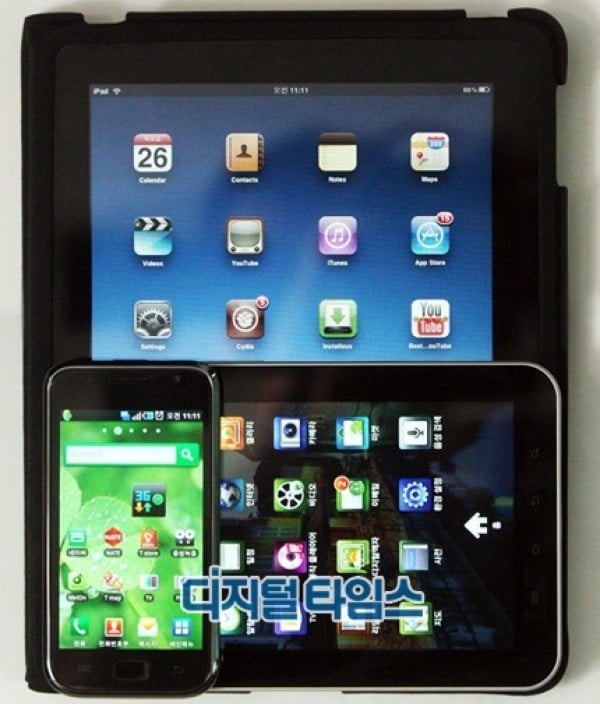 With so many pictures and videos of the Samsung Galaxy Tab Android tablet leaking out, we weren’t surprised this morning to see another video come out of the woodwork. This time, the video of the upcoming Android tablet from Samsung comes from Korean site, dt.co.kr.

The video shows some comparison shots of the Galaxy Tab alongside the iPad and the Galaxy S phone itself. It really gives you a sense of how small, yet how big a seven-inch display is. The seven-inch mark seems to be possibly the perfect size for a tablet – it’s definitely not smartphone size, but it’s not going to add much more heft to your bag/briefcase or whatnot. I think we’ll be seeing a smaller iPad sooner or later, but the Tab’s smaller size and powerful innards should be enough to sway others from Apple’s massively successful tablet.

It will likely depend on personal preference, but pricing will also play a big factor. If Samsung can price the Galaxy Tab very competitively, the company may have a leg up. Until Apple comes out with a smaller iPad, that is.

This is the first true competitor to the iPad, plain and simple. Streak? Not so much, as it’s still in screen size-limbo between a full fledged tablet and a smartphone. The Tab’s TouchWiz UI looks great on the bigger screen, and I’d expect Samsung’s Media Hub to play a big roll in the marketing push of the device.

This will likely be my fall back device if the Adam never materializes, and I’d enjoy a smaller tablet than a bigger one. Though if we could get some Cyanogen Mod 6 action on the Galaxy Tab, I may be swayed before the expected November Adam launch window. In either case, we are patiently waiting until we can get our geeky hands on one of these things.

Check out the video below:

Amazon Kindle Flies Off Shelves, U.S. Bookstore Has Over 670,000 Titles

Reading fanatics swooped in on the Amazon Kindle after the online retailer announced its $140 Wi-Fi only version about a...