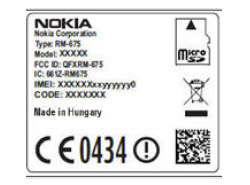 Nokia is cooking something interesting for the U.S. market or at least their new RFID-enabled device at the FCC’s website suggests so. We’ve no idea what’s the name of this handset nor whether it’s a smartphone or not. We do know it’s RFID-enabled, meaning it could be used for near-field communication (NFC) — i.e. wireless payments. In addition, we find a Wi-Fi 802.11n connectivity support on board, as well as a 3G radio that supports both T-Mobile’s and AT&T’s networks.

This is isn’t the first NFC-enabled device made by the Finnish company, but it’s the first for U.S. market and we’re looking forward to find out more about it in due course.

If I would have to speculate on the rest of this phone’s specs, I would assume it also rocks some camera (5-megapixel or more), Symbian^3 and some built-in storage capacity alongside a microSD memory card slot. As soon as we hear something new on this front, you’ll be the first to know. Stay tuned…

Eldar Murtazin, Editor in Chief of Mobile-Review, has struck again, gaining access to the C7, a device that is set...