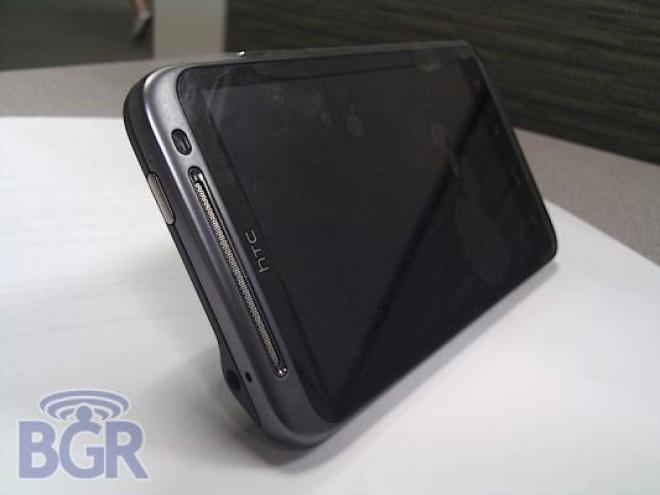 Another day, another HTC Android smartphone leak, in one form or another. This time around, we’ve got a live picture of a new Android smartphone that’s apparently headed to Verizon with a huge 4.3-inch display and kickstand, a la the Sprint HTC EVO 4G. The HTC-made device is sporting Sense, a kickstand (for watching video), and is wrapped in a G2-esque looking shell that’s about the same size as the EVO 4G. From the looks of it, this device is likely the Verizon version of the Sprint HTC EVO 4G.

As it stands, we have no idea what this thing will be called, but it could very well be the Merge. We spotted the Merge name floating around previously, and with the sighting of this massive Android phone that seems to “merge” the HTC EVO 4G with Verizon’s network, it certainly seems fitting. Whatever this device may end up being called, it may give the Droid X a run for its money.

The big-screened Android phone you see in the leaked pics show a dual-LED flash next to an 8-megapixel camera, as well as an expansive 4.3-inch capacitive touchscreen display. Both the camera and display are very likely the same hardware that we’ve already seen on the Sprint EVO 4G. And, just like the EVO, this Verizon-bound HTC device also sports a front-facing camera for video chatting and self-portraits. The device will more than likely come with Android 2.2 Froyo installed.

For those of you who have been wanting the EVO, but didn’t want to stray from the Verizon network, this the phone you’ve been waiting for. Now if we only had more information on the thing, because we are just itching with excitement. 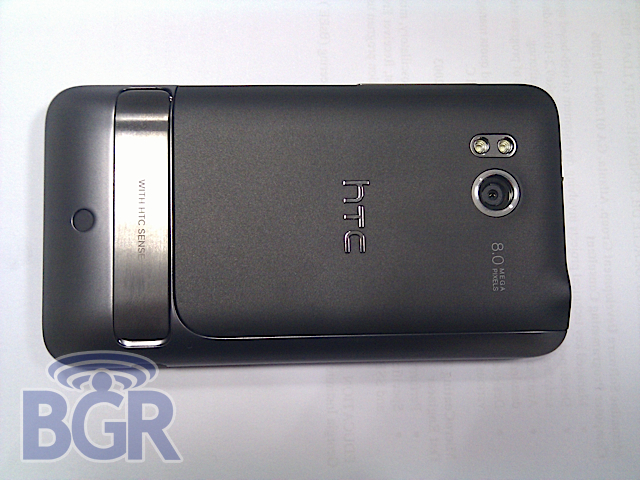 With no name or availability known about the device, we’ll happily speculate as much as we can until we can get some more solid information. There’s one thing we know we don’t have to worry about though, and that is that this device, whenever it may come, will be hands-down awesome. HTC is still the king of Android, and this device will likely deliver the goods in a powerful package.

Anyone else believe this bad boy may be the Merge, as well?