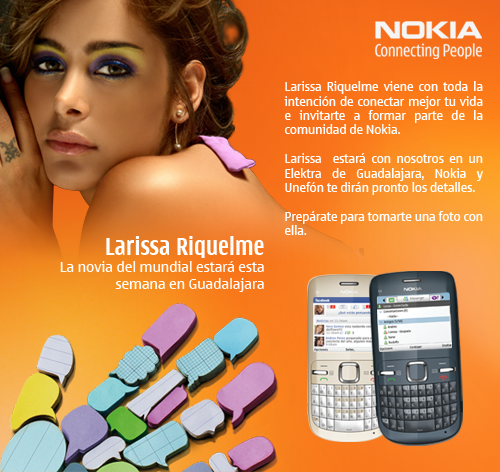 All my years of reading The Economist were for nothing because I always thought Paraguay’s top export were fruits and vegetables from hard working people living on farms, but apparently it’s ridiculously hot models who have no problem putting devices such as the Nokia E71 and C3 between their breasts for the sake of promotion. Earlier this year during the World Cup we shared some photos of Larissa Riquelme and the E71 she was keeping warm by placing them between her soft serve ice cream dispensers. Today there’s a video showing her pulling the same stunt, but with the recently made available C3.

What was once a fine novelty that circulated around cubicles and mobile phone technology blogs has now become quite the novelty. If Nokia starts doing this more often then you’ll get women’s rights groups complaining, possibly even other mobile phone companies imitating the idea and being even more creative by placing their products between two other glorious parts of the female anatomy. There’s no story here, at all. The C3 is a dumb phone that’s only interesting feature is the QWERTY keyboard and support for WiFi at a price point less than 100 EUR.

Sony Ericsson tried something similar by getting tennis star Anna Kournikova to pose in photos with their pieces of kit, but what good did that do? And don’t even get me started on the South Koreans, who when announcing devices at press junkets have 1 model per demo unit, batting their eyelashes, trying to get you to ignore how awful Samsung’s TouchWIZ, and whatever LG calls their beastly interface, really is. This type of marketing gets you attention for 200 milliseconds, but if you’re seriously the type of person who buys a phone after seeing it placed between a pair of tits then you need to get laid more often.

[Via: Unwired View, The Nokia Blog]

It was not Nokia, but a banner I spotted on the Interwebs informing me that the Finnish company's flagship smartphone...