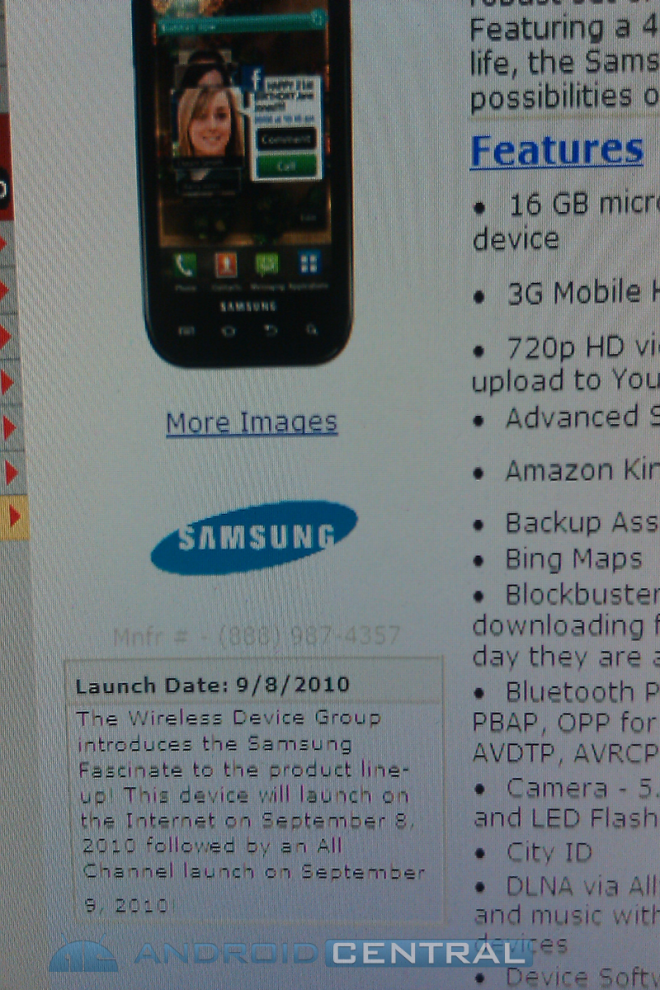 This new info comes from a screen shot of a Verizon document, so it seems fairly legit. AndroidCentral poses an interesting question about the device’s availability, though. If the Fascinate will be available online on September 8th, and an “All Channel” launch on the following day, what’s the point of the early online sales? If you were to buy the device online on the 8th, when would you expect to get it? The 9th? Doubtful. The day-early sale option may actually be intended for customers who’d like to secure the device ahead of time, and not worry about waiting in line, or see the phone sell out.

We know Samsung has already sold one million Galaxy S devices, but Verizon has a handful of great Android options to choose from. With the Droid 2, Droid X,  and Incredible in tow, something tells me that the Fascinate won’t sell out. Not because it’s not a great phone, but because the Android competition is red-hot over at Big Red, and some may be swayed by the Droid X’s large screen of the Droid X, the Incredible’s sexy Sense UI, or the Droid 2’s full slide-out QWERTY keyboard.

It would make sense to make the Fascinate available for reservation or pre-order the day before the official launch. This would help alleviate any potentially long lines. One thing we do know is that now we can expect one more Galaxy S TV spot, and something tells me it won’t be as compelling as any of the Droid X ads we’ve seen from Verizon. Still, Samsung must be doing something right, and we can’t see what else they have up their sleeve in the future.

Now we’re just waiting on the Fascinate and the Tab, and hopefully Samsung has a new bag of tricks already lined up for us. Stay tuned for more from IFA 2010!

Remember the Motorola portrait slider Android device (XT300) we saw not too long ago? The severely blurred images gave us...