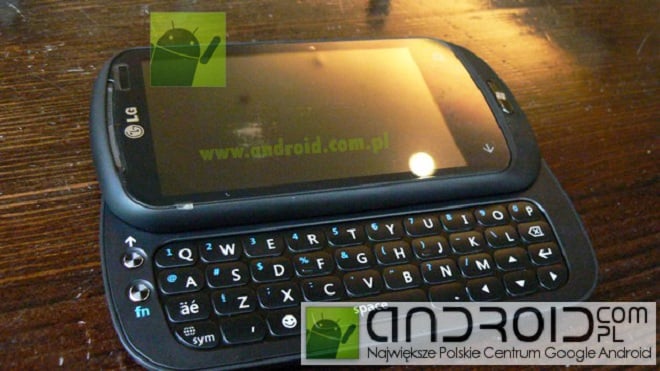 LG Electronics may want to hire a few plumbers because it’s leaking like crazy. First, we saw the E900 and now you can feast your eyes on the C900, which will be powered by Microsoft Windows Phone 7.

The C900 could be a launch device when Microsoft Windows Phone 7 hits in about a month or two and the photos make it appear like it will sport a metal frame. The capacitive screen is only supposed to be 3.2 inches but it may be one of the few launch devices with a full slide-out QWERTY keyboard.

Look for the LG C900 Windows Phone 7 device to have a Qualcomm Snapdragon QSD8650 at 1.3 GHz and this should make that “Metro UI” run like butter. Expect all the high-end trimming you’d expect like a light and proximity sensor, GPS, WiFi, GPS, Bluetooth and other goodies. The spies say this could launch in Europe soon for about $350 but we haven’t confirmed that one yet.

At this point, we may have seen every Microsoft Windows Phone 7 device leak, or at least the launch lineup. Of those we’ve spotted, I’m looking forward to the HTC T8788 because it has a relatively unique slide-out speaker. I don’t’ know how useful that will be but it definitely looks interesting.

Microsoft Windows Phone 7 will launch in the fourth quarter and we know it will launch simultaneously in the United States and Canada. It’s going to be tough to gain market share because the iOS, BlackBerry and Android platforms are already firmly established and multiple high-profile devices have recently been purchased and these locked millions of customers into long-term contracts.

Still, I’m bullish on the chances of Microsoft Windows Phone 7 because the UI looks like a fresh stab at this space and the developers should be on board. I can’t wait.

Check out this brief video of the LG C900 and hop on over to the “via” link for more photos.