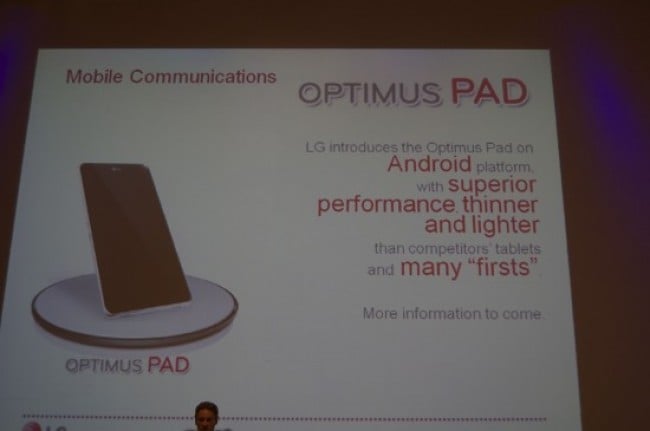 We knew LG had big plans for Android including a tablet, but that was about it. Although we still have very few details, the LG Android tablet now has a name, the Optimus Pad.

Since all that was announced about the tablet was the name, we have every reason to expect that it will still launch in fourth quarter of this year, so if you’re thinking about pushing the green button on a tablet purchase soon, don’t expect this to be a choice.  The Optimus Pad is said to be thinner and lighter than the competition, meaning the iPad and Samsung Galaxy Tab, of course. Add in some “superior performance,” and many “firsts” and the Optimus Pad has definitely caught our attention … until another Android tablet is announced, that is.

Although LG only has one Android handset here in the United States, the other offerings around the world aren’t much to write home about either. Can LG deliver a tablet that will make people want to buy one?

We’re not sure, but when it comes to LG, I’d say the bigger the better. The company’s handsets aren’t much to talk about, but everyone wants a washer/dryer from the company, so maybe if they make something bigger than a smartphone, it will be better? Who knows, we’re trying to stay positive!

We definitely wouldn’t be surprised if the tablet came with a Tegra2 processor, as the company has made clear that they will use it in upcoming mobile devices. The Optimus Pad willjoin many tablets that will use the Tegra2, and just for that it will jump to the top of the pile.

That said, if LG wants to create a good amount of hype for the Optimus Pad, they best do what all the cool kids are doing now days and accidentally “leak” something out about the device into the world so it will still be fresh in our minds.

Is the Optimus Pad something you’ll be looking forward to? Let’s hear it in the comments.