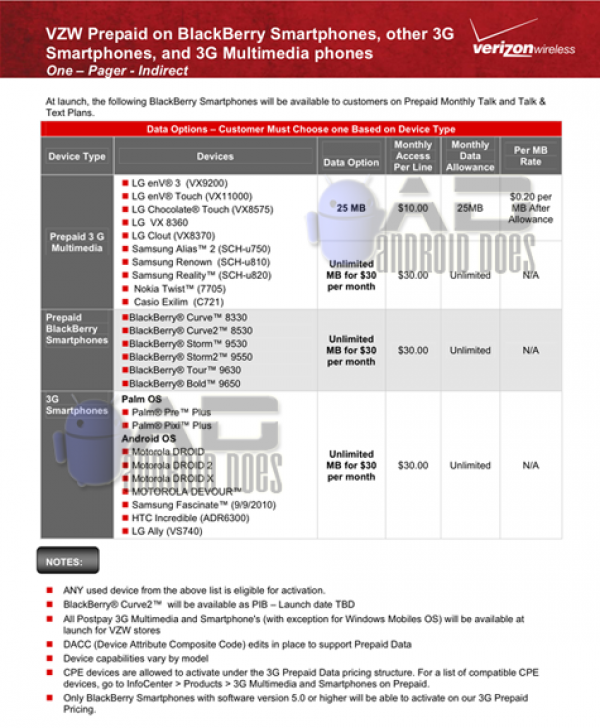 Verizon is stepping up its game on the prepaid front by offering some killer smartphones for this no-contract service. No longer will customers on Verizon have to choose from the crappy phones that most carriers provide for prepaid plans.

It looks like Verizon will begin to offers these devices starting Sept. 2 – every Droid phone in Big Red’s line up will be available for prepaid services, as well as both webOS devices, and a handful of Blackberry phones.

Here’s the full list of phones that Verizon will offer for prepaid plans:

Pay as you go is really the way to go if you’re looking to save some money on your phone bill and with Verizon offering such great devices, there’s more incentive to go prepaid. You’re going to pay the full price of the device you choose, and will need a data plan, but that sure beats the pants off of a two-year contract and dealing with things like an Early Termination Fee. Speaking of which, Verizon is known for quite a hefty ETF now days, so we’re even happier that customers have a choice to go without a contract.

So, you non-committers out there will now soon have the chance to get some of the latest and greatest smartphones from the nation’s largest carrier on a pay as you go plan. If you’re considering one of these high-end phones, be ready to throw down about $500 before you walk out of the Verizon store, but it will certainly be worth it. Now, what we’re wondering is if the Droid 2, X, or Incredible will actually retain their mobile hotspot feature as an add-on for prepaid devices. Something tells me that they won’t, but that would surely sweeten the deal.

UPDATE: This looks like a cased closed now, as we now have a shot of a Blackberry Curve box with those lovely ‘Verizon Prepaid’ words adorning the top. Looks like we don’t have much longer to wait to see the rest of them!

We knew LG had big plans for Android including a tablet, but that was about it. Although we still have...