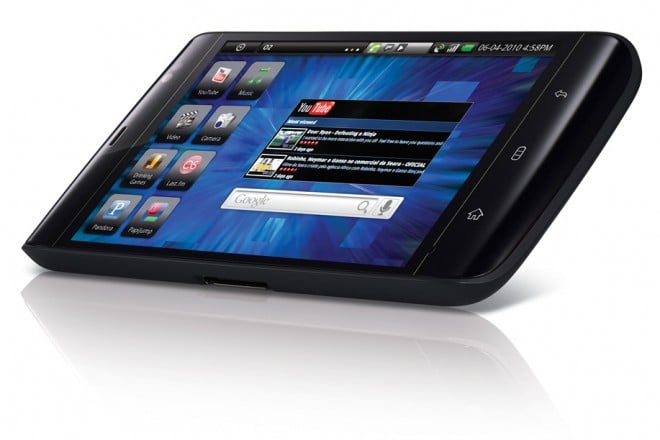 Well, we were hoping that the Dell Streak in the United States would skip right to Froyo as we heard before, but we can’t be upset about an upgrade. That still may be true, as O2 users are said to be receiving the Android 2.1 update at the moment, while AT&T users are still stuck on 1.6. Only a few days off of the projected release date, we’re glad someone is getting an update.

Even if the U.S. version will skip Eclair and go straight to Froyo, one can’t help but be jealous of the users over in the UK who are getting some sort of update. Who knows when the Streak will get Android 2.2 Froyo? I’d imagine it may be quite a ways away. I could be wrong on that one, but the fact that the UK users are getting Eclair right now makes me think that Dell may be just now be developing Froyo for the device.

Eclair brings a whole level of goodness to the Android OS, making it more social with Facebook and Twitter contact integration, live wallpapers, and more. The update also brings multitouch to the Streak, as well as the ability to record video in 720p. In addition to the overall OS upgrades, Streak users running Android 2.1 will also be able to access many more applications from the Android Market. Fancy that official Twitter app that’s reserved for Android 2.1 and up? It’s there. While you’re at it, you may as well go get the Angry Birds betatoo, and waste some time and battery life on your refreshed mini-tablet.

Hopefully the U.S. update to anything above 1.6 will be on its way shortly, but for now, the O2 users got the goods. Hopefully they’ll be pining for what we have if Dell does indeed skips Eclair in favor of Froyo. For now, AT&T Streak owners can always root your device and throw a custom ROM on it, if you’re so inclined.

So how long do you think it will take before we see Froyo on the Streak?

Motorola mocks Apple for not having Flash

Motorola is not messing around with its latest full-page advertisements, as the company is going after the Apple iPhone (and...