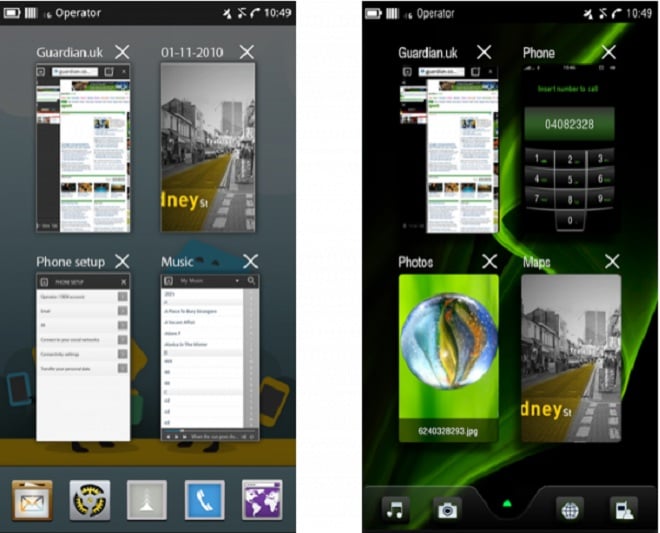 You may recall that MeeGo is a new smartphone OS from Intel and Nokia and it merges the Maemo and Moblin platforms. It is expected to be a modern OS on par with the iPhone and Android, and the screen shots we’ve seen do look pretty good.

The screenshot above shows a little of the multitasking interface, which kind of looks like a mix of the way Android and webOS handle this. It should also have little carousel animations and other flourishes for visual flair.

Other screenshots we’ve seen of MeeGo make it look like a credible OS but nothing has blown me away yet and the competition is so intense that it is going to have to come out of the gates with a bang.

Nokia has intimated that MeeGo will be its platform of choice for the high-end market, while the open source Symbian will power its mid-level and lower end smartphones. This could be a good move because this OS looks promising and Nokia needs to get its mojo back in the high-end space.

Of course, you have to wonder how well developers will take to MeeGo, as apps are quickly becoming an important factor in which platform consumers choose. The use of Qt should make it technically easy for developers to support this new platform but the incentive may not be there without a huge user base.

Nokia could always take a page out of Microsoft’s book and pay developers to create apps for its new platform. Microsoft wants to make sure Windows Phone 7 launches with a strong app catalog and it has the money to make it happen – so, why not throw some cash in the direction of developers?

[Via My Nokia blog, MeeGo]

Video: Charging the Nokia N8 with a hamster

I'm not sure is this a part of Nokia's official N8 campaign or not but I love it, nonetheless. Sure,...