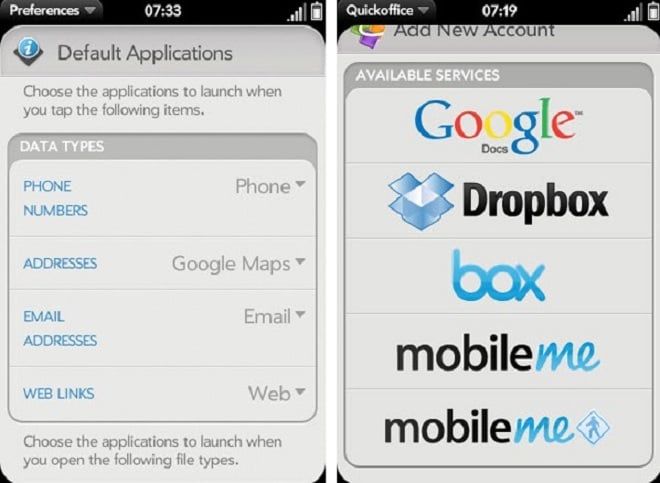 The drum beat for Palm webOS 2.0 continues to get louder as some new screen shots of the operating system have popped up online and these show multiple new services and integration with online favorites like Dropbox.

The Palm webOS 2.0 beta had been seeded out to developers and we already knew about things like a Stack interface and improvements to Synergy (I want more granularity over controls) but the latest batch of screenshots from the Chinese shot Wibozi show native integration with Dropbox, which seems cool. The online service is a cloud storage company (with apps of its own) that could potentially eliminate the need for a huge amount of on-board storage.

There’s also MobileMe integration, which is a bit strange considering the public spat between the use of iTunes with the original Pre but it’s good that Palm is giving users as many options as possible when it comes to online storage. I’d like for HP to just bite the bullet and give every webOS 2.0 users 10 GB of online storage for free – that would be a nice selling point, I think.

So, the real question is: when are we going to see webOS 2.0 on retail devices? HP has said it is on track for a late 2010 release, so, hopefully, we’ll get a hardware announcement soon. HP and Palm could be waiting for CES in January 2011 but I sincerely hope the companies will have something ready to go by the holidays. Of course, the clock is ticking.

One of the most exciting things that should run Palm webOS 2.0 is the much-vaunted PalmPad, which is on track for an early 2011 release. I always thought this platform would scale up nicely to the tablet form factor and if it has a killer set of features and a palatable price tag, I could see it being a credible iPad competitor.

Hit the “via” link for some more shots.