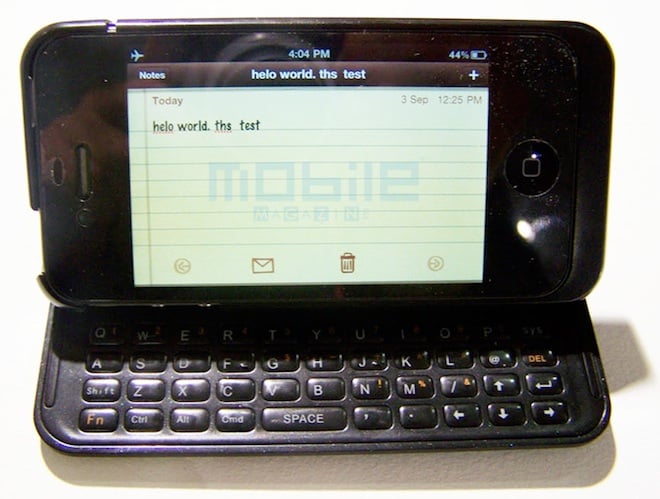 For all of Apple’s advancements in mobile phone design, both in terms of hardware and software, one thing that a handful of users have been clamoring for is a hardware keyboard and as luck with have it there’s a company called Nuu that has just announced a case that gives your iPhone 4 a Nokia N97 Mini style makeover.

The “Mini Key“, as this bastard child will be known from here on out, gives the iPhone 4 a full QWERTY keyboard, including directional keys, via a Bluetooth connection. Not only that, but the “Mini Key” also helps solve any issues you may be having related to the antenna by wrapping one of Apple’s most gorgeous creations with a thick coating of terrible quality plastic.

Now if you’re seriously considering buying this, then you’ve got problems. If you’re a new iPhone owner then just give it time, and soon you too will type just as fast on a piece of glass as you once did on raised plastic bumps. As much as I would like Apple to release an iPhone, or better yet an iPad, with a QWERTY keyboard, this half-assed solution isn’t going to sway anyone to pick up an iPhone 4. Thanks to how Android works though there are a slew of devices on the market with a QWERTY keyboard. Whether any of them are good is another question all together, but the recent release of the Motorola Milestone 2 has me questioning my current relationship with the Nexus One in my pocket.

Here’s one benefit with this accessory: You’re likely to not get mugged since you’ll look like you’re using one of those Chinese iPhone clones worth less than $100 that you picked up in some dubious back alley. You’ll also turn off potential mates by your horrible taste in electronics, thus helping the over-population crisis.