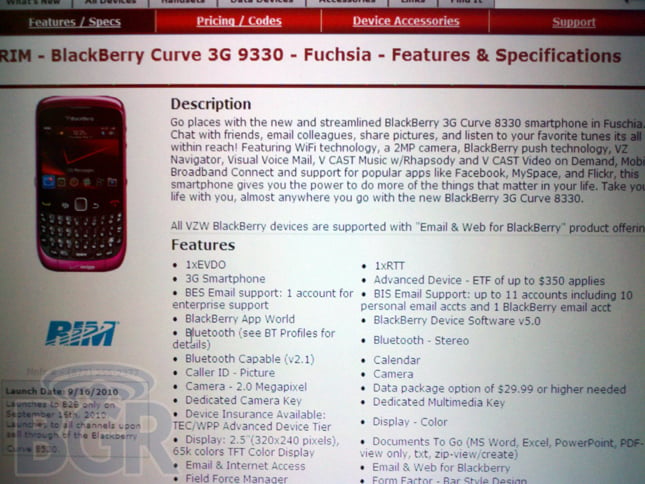 RIM’s refreshed entry-level smartphone will be making the switch from GSM to CDMA shortly, as the BlackBerry Curve 3G 9330 has showed up internally, complete with specs and launch dates, but no pricing. Business channels will gain availability starting September 6, while everywhere else will become stocked as they run out of Curve 8530s. Colour options will include fuchsia and a more subdued gray.

As you might have heard, the Curve 3G has a QVGA display, fixed-focus 2 megapixel camera with no flash, 256 MB of RAM,  3G by way of EV-DO 1x, Wi-Fi b/g/n, and GPS. Oh, and don’t forget, it’ll eventually run OS 6, which currently seems like it’s only real selling point over the BlackBerry Curve 8530 which has been available for some time now.

It’s not often that RIM releases BlackBerrys for both GSM and CDMA networks so closely together, but with such a minor update to the BlackBerry 8530, it’s probably easier to pull off.  It’s kind of sad that the software features have changed so little within recent memory that they could copy and paste the description for the BlackBerry 8330 (that’s the original,  two-year old Curve) with a few minor edits. Still, the Curve 3G keeps RIM’s entry-level device nice and fresh, and despite all of the press higher-end smartphones get, some people don’t need all the bells and whistles.

Vodafone isn't the only one gearing up to launch the BlackBerry Torch 9800 in the UK; O2 will also have...