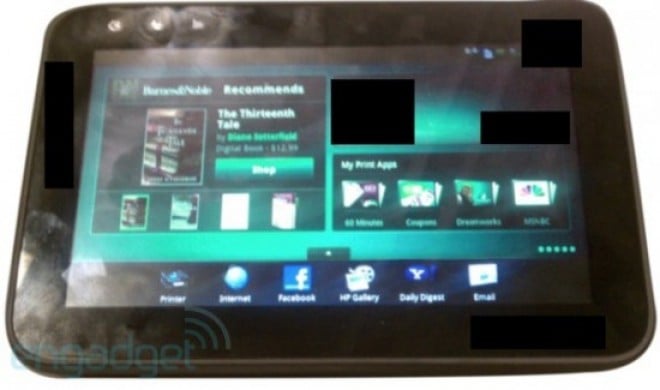 We thought HP had shifted their resources from making Android tablet in favor of pushing out a WebOS tablet as fast as possible,  but it looks like an HP Android tablet will be making an appearance sooner than later. The first pictures of HP’s Android tablet, the Zeen C510, have surfaced, and reveal a heavily customized version of Android that looks similar to the HP TouchSmart interface.

The skin seen in the picture above makes Android completely unrecognizable, so if you were looking for a stock experience, keep looking, as you won’t be finding it here. If you’ve ever seen the company’s  TouchSmart PCs, you’ll be able to recognize that this is pure HP. We don’t know how much Android is stripped away in the settings or even app availability, but it looks like HP wants as much control of the tablet’s UI as it can get away with, and wants it to stay that way. We’ll see what the XDA devs have to say about that.

There is one more picture, showing the lockscreen on the tablet. It looks to have survived a brutal skinning, yet some slight tweaks have been made. Rumors say that the tablet itself may ship bundled with one of HP’s printers, the Zeus for $399. It will also be available on its own, but the price has not been revealed.  Zeen is said to be running Android 2.1, with no word if it will receive Froyo, or anything beyond that. The picture above shows a Barnes & Noble recommended widget, so we can expect that e-book reading will be a major component in the Zeen’s marketing campaign. And what tablet would be complete without an app that allows you to read personal information about your friends and look at pictures of your drunk co-workers the past weekend the Facebook app?

It’s one thing to heavily customize Android, but it’s another to not allow a user to download applications. If the Zeen is void of the Android Market, it’ll be a deal breaker for many. Not having access to the Android Market is a deal breakers for any tablet if the company wants to be as successful with its product as, say an iPad or the highly-anticipated Samsung Tab. Let’s hope HP thought this one through and will include the Market, although there may be reason to believe that no Google Applications will ship with this tablet.  We’re not saying this is true, but the lack of any Google App in the picture just paints a slightly grimmer outlook on the tablet for me.

So, we’re finally seeing the first pictures of HP’s Android tablet, and it has a heavily customized skin, an outdated version of Android with no word if it will upgrade any further. Sounds enticing, no? While manufacturers are trying to produce a decent Android tablet, the iPad may become more appealing to some of those who’ve been waiting for an alternative.

Oh, and don’t forget about the HP WebOS tablet.

Verizon to make Bing default search on all Android phones?

Quite a zinger has been given to Google today for their Android mobile operating system, by none other than Verizon...