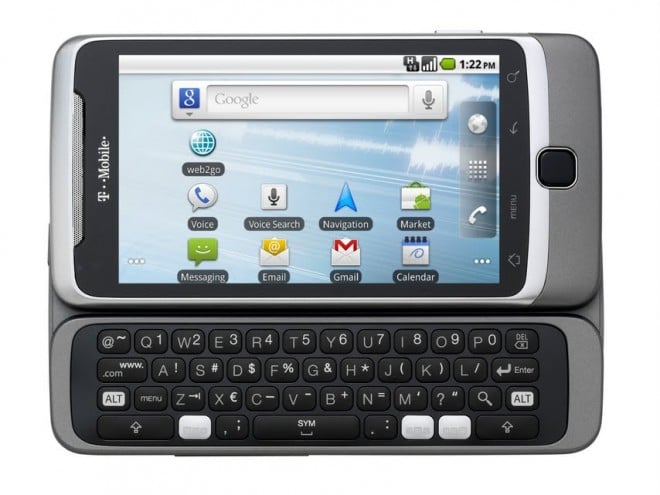 Well, it’s not that surprising, but T-Mobile officially announced the G2 Android phone and this baby rocks HSPA+ speeds.

The device, of course, is the followup to the world’s first Android phone, the T-Mobile G1. It will launch with Android 2.2 and from the looks of the press release, it appears that it will be stock Android (Like the original, HTC makes the T-Mobile G2).

The T-Mobile G2 is Google to the gills, as it will come with Quick Keys to Google services like Google Voice Actions, Google Maps and other software from the search giant.

Perhaps more importantly, this is the first device that can access the T-Mobile HSPA+ 3G network. T-Mobile was a joke in mobile data services a few years ago but its HSPA+ 3G network is nothing to sneeze at – this offers 21 Mbps (that’s theoretical, look for about 14 Mbps or so in optimal conditions with the T-Mobile G2).

As expected, the T-Mobile G2 will come with the Snapdragon MSM7230 mobile processor with a 800 MHz CPU. I know devices like the Sprint EVO 4G and the Droid X have seemingly made a 1 GHz processor seem like the standard but numbers aren’t everything, as we’ll be curious to see how a stock version of the Android 2.2 runs on some optimized hardware.

Look for a 3.7-inch display but there’s no concrete word if it’s AMOLED or Sony’s Super LCD. It will also have a 5-megapixel camera capable of 720p HD video, a pre-installed 8 GB memory with support for up to 32 GB, GPS, Bluetooth and all the goodies you expect from a device of this class.

“One of the advantages of an open platform is the opportunity for developers to create rich mobile experiences and seamlessly get those experiences into the hands of consumers,” said Andy Rubin, vice president, engineering, Google, in a prepared statement. “From new services, such as Voice Actions, to mobile applications, developer-led Android innovation is flourishing. On Android Market alone, the number of applications available to consumers has grown from just 50 applications two years ago to more than 80,000 applications today.”

The T-Mobile G2 will be available for preorder to Magenta customers “later this month.” No word on pricing or release date but I’d bet on a $200 subsidized price with a new contract and a release date by late September.

With stellar Android devices like the EVO 4G, Droid X and the Samsung Galaxy lineup, our resident Android head Blake asked if the T-Mobile G2 can compete. What do you think, friends.

We thought HP had shifted their resources from making Android tablet in favor of pushing out a WebOS tablet as...