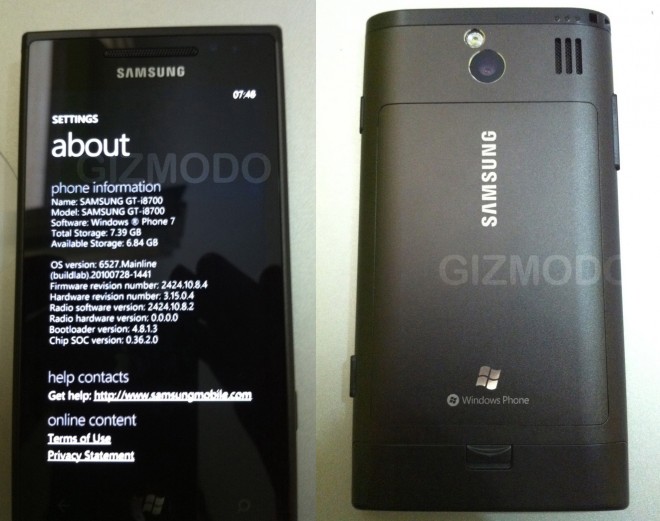 Windows Phone 7 isn’t just going to be headed up by LG at the launch this fall; Samsung has already committed to supporting the rebirth of Microsoft’s mobile platform, though the bulk of their attention is bound to be on Android for the immediate future. These are pictures of the Samsung GT-i8700, which we had seen in some incarnation a couple of weeks ago, but without so much as a model number. Besides the 8 GB of storage memory and a camera with flash, pickings for specs are slim. We’re under the impression that this is a larger phone, so don’t be surprised to see it in the 3.7″ to 4″ category.

Windows Phone 7 promises to be a fresh start for Microsoft, scrapping the Windows Mobile of old, and starting fresh with tight integration with Xbox Live console gaming, Zune music services, Bing web search, and other Microsoft products. Of course, hitting the reset button has its downsides – simple stuff like non-Marketplace apps, cut and paste, and proper multitasking won’t make it at launch. Microsoft themselves suspect it’ll take upwards of five years before Windows Phone becomes what they want it to be. Hit up our hands-on video of Windows Phone 7 in action from the launch in February for a closer look.