iOS 4.1 for the iPhone is now available for download and with the upgrade comes iTunes Ping, Apple’s new music-based social network. So far it has suffered plenty of criticism, but people are ignoring Ping’s exciting potential. Let’s take a look at how Ping works and how it might fit into you life. 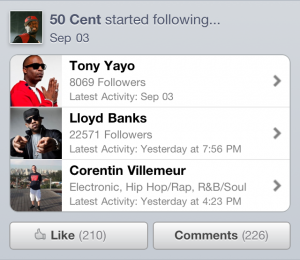 Think for a minute about how you currently learn about new music. You probably have hundreds of Facebook, Twitter, and Tumblr friends (or acquaintances), but for some reason those people rarely share what they’re listening to or their favorite new artist discovery. Even with all the “Tweet It” and “Like” buttons, we don’t know what’s in each other’s playlists or what we’re purchasing. Yes there’s Last.fm, Pandora, Rdio, and MOG, but they all provide basic or hidden functionality for sharing and commenting about what they are currently listening to or have recently purchased.

Apple’s Ping will change this (once I’m able to automatically add Facebook and Twitter friends!). As more people participate on Ping, a powerful recommendation engine will serve up potential song suggestions in the form of an activity stream. If my tastes are consistent with certain friends’ tastes, then I’ll definitely click on tracks they purchase. Of course the opposite is true for friends I usually disagree (or argue) with.

What’s even more exciting than friends getting to know each other through music is how close Ping brings us to our favorite artists. In your activity stream you see both friends and artists you follow liking, commenting, and sharing. Instead of the expected behavior of putting artists on pedestals, they are placed on the same level as us. For example, I noticed Lloyd Banks liking a 50 Cent video above my friend’s recent album purchase. Artists are also using their own language to announce new tracks or albums. This is a level of personalization and interaction we haven’t seen yet in iTunes. Comments and ratings have been around for some time on album pages, but they were made by strangers. Soon my friends will be the ones commenting. 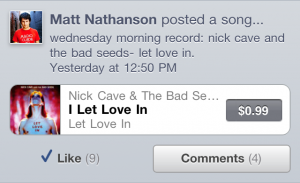 Where else can this go? Imagine random album facts being released into the world from their CD booklet prison via comments. Artists can respond (if they have time) to your questions. We could even see giveaways like concert tickets and swag to loyal followers. We have a new reason to get excited about music. Now if only Apple would do something with their acquisition of Lala so we can get some streaming action.

Google Voice May Make Its Way to the iPhone

Last year, when Apple still had pretty tight rules when it came to submitting and approving apps to its app...