Say you’re not a mobile phone geek like us, and you don’t have your Android smartphone at arm’s length from you (at most) at all times. Wouldn’t it be cool if you could get notified right from your desktop when your handset receives a call or text message without having to be within earshot of your phone? Well, you’ll be happy to hear that Android Notifier is an application that will conveniently tell you when your phone has missed a phone call or received a text message. 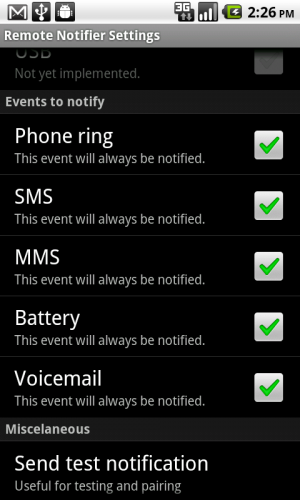 In order to get Android Notifier set up, you’ll need to download the desktop app, as well as the Android app so the two can communicate properly. Both apps are easy enough to set up, and you’ll be up and running phone-free in no time. So if you’re listening to music at your computer, and might not be able to hear the phone in your desk drawer ringing, Android Notifier may be your savior. You can’t reply from your computer, but at least you’ll be able to know when your handset needs some attention.

You can also customize your notification. If you don’t want your computer to tell you what your battery percentage is, it’s only a check box away in the settings to be removed. You can also use the service through Bluetooth if you so choose. So for what Android Notifier does, it’s rather flexible, and many people will enjoy it’s functionality. So for those of you who aren’t permanently attached to their mobile phones, what are you waiting for? You’ve got a call/text to ignore!

I was a little skeptical about this app, as I’m always near my phone, but once I got it up and running I was impressed. I’m not sure if I’ll continue to use it, but it’s something that may appeal to a lot of people. We’d be interested to see if this will be integrated into Google TV someday. Imagine watching your favorite TV show on Google TV and you’re notified via pop-up box window that you’ve just received a text message on the smartphone that you left on the kitchen table. We have to admit that a Google TV version of this app could be as annoying as it is useful, but we’d like to see it happen anyway.

To get started, you can go to the products home page here. And just a heads up, there are two separate programs for the desktop. One for Windows/Linux, and one for Mac, so make sure you download the right one!

The Sony Ericsson Xperia X10 is one incredibly sexy Android device but it's been under fire for quite a few...